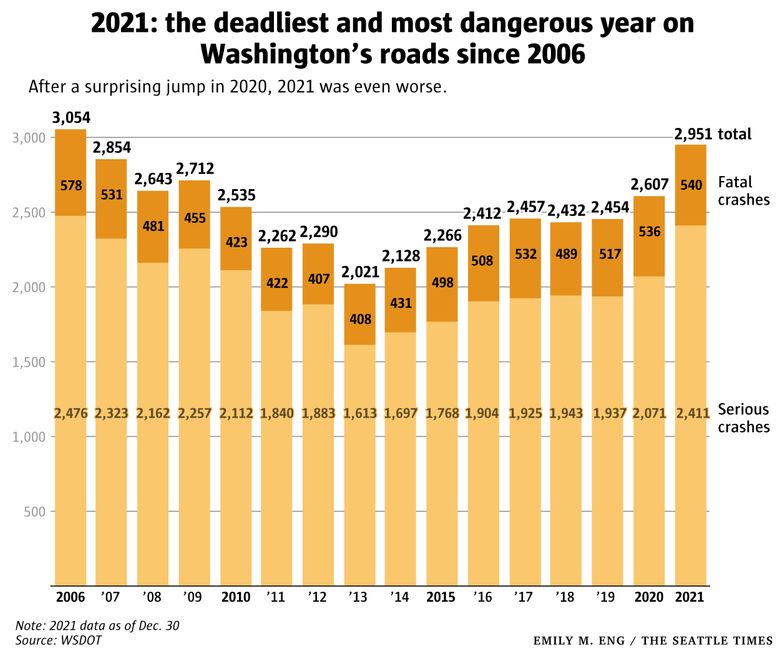 Excellent article by journalist David Kroman found that 2021 was the deadliest on Washington roads in 15 years.

Washington for the year saw 540 fatal crashes, which killed more than 600 people, according to data from the Washington State Department of Transportation. Not since 2006 have the numbers been that high. In 118 of the year’s fatal crashes, a bicyclist or pedestrian was killed. An additional 2,411 crashes in 2021 resulted in likely serious injury — also the most since 2006 and 16% more than in 2020.

Alcohol- and drug-influenced serious and fatal crashes remained high in 2021, sustaining a harrowing 25% jump from 2019 to 2020. Speed, too, continued to play an outsized role after climbing nearly 18% in 2020.

Kroman reports that in Seattle, 31 people were killed in car crashes in 2021, according to preliminary data from the Seattle Department of Transportation. That, too, is the most since 2006. Jim Curtain, project development director at SDOT, said 19 of those deaths were pedestrians, and nearly half involved hit-and-runs. The city has also seen a jump in impaired driving, Curtain said.

Kroman reports that early in the pandemic, reports from state troopers suggested behavior behind the wheel had become more extreme. There was a rise of speed-related crashes and so-called “aggressive drivers.” As the roads emptied, drivers could more easily hit triple digits on their speedometers. Combined with a rise in alcohol and drug use, collisions that may have been moderate in 2019 became serious or deadly in 2020.

As traffic returns, 2021’s picture is less obvious. Speed and distraction are almost certainly at the trend’s core, said Mark Hallenbeck, director of the Washington State Transportation Center at the University of Washington. But there’s another, more nebulous cause that’s even more difficult to track.

“We have a pissed-off society . . . When you are in your big metal box of a car, you have an awful lot of ability to act out your frustrations both with accelerator and brake.” ~Mark Hallenbeck, director of the Washington State Transportation Center

Washington’s 6% rise in serious and fatal crashes from 2019 to 2020 was close to average for the country that year, which saw a national 7% spike, according to the National Safety Council. Maine, Arkansas and Washington, D.C., experienced the sharpest jumps, each over 30%. Rhode Island saw a 24% increase.

My opinion? The stressors of 2020-21 — isolation, uncertainty, fear — remain. And with them comes an environment still conducive to risk, substance abuse and high speeds. Please contact my office if you, a friend or family member are charged with a DUI, Reckless Driving or any other crime. Hiring an effective and competent defense attorney is the first and best step toward justice.

Apparently, at least in terms of the sheer number of accidents, West Bakerview Road and Northwest Drive reigns as the most dangerous intersection in the city.

In a distracted driving study conducted by its traffic division from January 2016 through June 2017, Bellingham Police received 1,350 reports of accidents within city limits, regardless of severity or injury. Of those, 43 accidents occurred at the intersection of Bakerview and Northwest — the highest total of any intersection in town.

The only intersection breaking up Bakerview’s stranglehold on the top of Bellingham’s dangerous intersections list — Lakeway Drive and Lincoln Street, which had 25 reported accidents — is very similar, with two busy shopping centers and a school occupying three of the four corners. Nearby Lakeway Drive and King Street tied for sixth-most dangerous with Woburn Street and Barkley Boulevard with 14 reported accidents, each.

Please contact my office if you, a family member or friend are criminally charged for traffic-related incidents. Unfortunately, it’s very easy to be charged with DUI, Reckless Driving, Negligent Driving, Driving While License Suspended, Eluding and/or numerous traffic citations. Bellingham’s dangerous intersections only exacerbate the situation and make it more likely that an unlawful pretextual pullover will happen.

Most of all, drive safe!

In State v. Brooks, the WA Court of Appeals held that the neutral area separating a highway on-ramp from an adjacent lane of travel does not meet the definition of “roadway.” A driver who crosses this area is properly stopped for a violation of Driving with Wheels Off Roadway under RCW 46.61.670.

While merging onto westbound U.S. Route 97 from U.S. Route 2 in Chelan County, Jena Brooks’s car crossed over a portion of the highway designated as a “neutral area.” A neutral area is a paved triangular space separating an entrance or exit ramp from an adjacent lane of highway. The neutral area between Route 97 and its merger with westbound Route 2 is marked on each side by thick white channelizing lines. The drawing below is a depiction of a neutral area similar to the one crossed by Ms. Brooks:

A Washington State Patrol trooper observed Ms. Brooks’s vehicular activity and performed a traffic stop. Ms. Brooks was ultimately arrested for driving on a suspended license and other misdemeanor offenses.

During proceedings in district court, Ms. Brooks filed a motion to suppress, arguing her vehicle had been stopped without probable cause. The motion was denied. Pertinent to this appeal, the district court ruled Ms. Brooks’s merger over the highway’s neutral area constituted “driving with wheels off roadway,” in violation of RCW 46.61.670. 2

Ms. Brooks was subsequently convicted of several misdemeanor offenses after a jury trial. Later, she successfully appealed the suppression ruling to the superior court. It found Washington’s definition of a roadway ambiguous in the context of a highway’s neutral area. The superior court then invoked the rule of lenity and determined Ms. Brooks should not have been stopped for driving with wheels off the roadway in violation of RCW 46.61.670.

The Court of Appeals addressed (1) whether the term roadway is ambiguous in the current context, and (2) if the term is ambiguous, whether the rule of lenity is an available tool of statutory construction that might benefit a defendant such as Ms. Brooks.

“A highway’s neutral area is not a vehicle lane. It is too short to facilitate meaningful travel. And its triangular shape cannot consistently accommodate the size of a vehicle. Rather than being designed for vehicular travel, it is apparent the neutral area is designed as a buffer zone. It keeps vehicles separate so as to facilitate speed adjustment and, in the context of a highway on-ramp, safe vehicle merging.”

The Court further reasoned that National standards set by the Manual on Uniform Traffic Control Devices for Streets and Highways (MUTCD) confirmed its observations about the apparent design purpose of a highway’s neutral area. In short, the Court reasoned the MUTCD refers to the neutral area as an “island.” As such, it is an area intended for vehicle “separation.”

“Although a neutral area may be designated either by a wide or double solid white channelizing line, the two options carry no substantive significance” said the Court of Appeals. “Like a double white line, a solid white line can serve as an indicator that crossing is prohibited. The whole point of a neutral area is to exclude vehicles and promote orderly and efficient traffic flow,” said the Court of Appeals.

The Court concluded that Ms. Brooks failed to maintain her vehicle wheels on an area of the highway meeting the statutory definition of a roadway. A vehicle stop was therefore permitted under Washington’s wheels off roadway statute. Consequently, the superior court’s order on appeal from the district court is reversed.

Surprisingly, there’s quite a bit of caselaw on what constitutes “Driving With Wheels Off the Roadway.” Please contact my office if you, a friend or family member face criminal charges following after a police officer pullover where this citation led to arrest. It’s quite possible to suppress the fruits of a search based on unlawful stop, search and/or seizure.