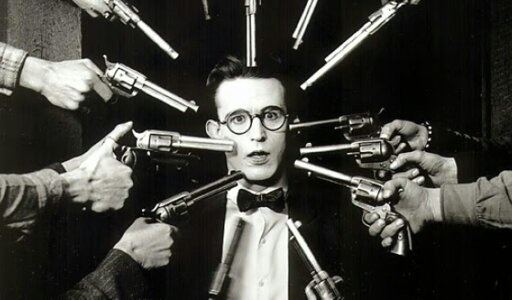 In Thompson v. Copeland, the Ninth Circuit Court of Appeals held that a police officer uses excessive force when he points a gun at a suspect’s head and threatens to kill the suspect after the suspect, who was arrested for a felony, has already been searched, is calm and compliant, and is being watched over by a second armed deputy.

In December, 2011, Pete Copeland, a deputy in the King County Sheriff’s Office (“KCSO”), was on patrol in the City of Burien, Washington. After watching Lawrence Thompson commit “multiple traffic violations,” Copeland pulled him over. Thompson apologized to Copeland but failed to provide a driver’s license, although he did offer up some mail addressed in his name.

Copeland had Thompson exit the vehicle and patted him down for weapons. Finding none, Copeland radioed for backup, and had Thompson sit on the bumper of Copeland’s patrol car. Copeland then conducted an inventory search of Thompson’s vehicle. During his search, Copeland saw a loaded revolver sitting in an open garbage bag on the rear passenger-side floorboard. After seeing the gun, Copeland decided to arrest Thompson for Unlawful Possession of a Firearm.

Thompson continued to sit on the bumper of Copeland’s police cruiser, watched over by another deputy who had arrived for backup on the scene. Thompson was about 10–15 feet from the gun in the backseat of his car, and was not handcuffed. Copeland signaled to the deputy watching over Thompson, then drew his gun.

What happened next is disputed by the parties. Copeland claims he unholstered his firearm and assumed a low-ready position, with his gun clearly displayed but not pointed directly at Thompson. By contrast, Thompson claims that Copeland pointed his gun at Thompson’s head, demanded Thompson surrender, and threatened to kill him if he did not.

Copeland directed Thompson to get on the ground, facedown, so that he could be handcuffed. Thompson complied and was cuffed without incident. Copeland arrested Thompson for being a felon in possession of a firearm. The State of Washington charged Thompson with Unlawful Possession of a Firearm. However, the charges were dismissed after determining that the evidence against Thompson had been gathered in violation of the Washington State Constitution.

Thompson sued Officer Copeland and King County under 42 U.S.C. § 1983, alleging violations of his Fourth Amendment rights. Specifically, Thompson alleged that Officer Copeland used excessive force in pointing his gun at Thompson and threatening to kill him.

In recommending dismissal of this claim, the federal Magistrate Judge  found that the degree of force used on Thompson was reasonable given that Officer Copeland was conducting a felony arrest of a suspect who was not secured, who was in relatively close proximity to a weapon, who was taller and heavier than him, and who had a prior felony conviction for unlawfully possessing a firearm. The Magistrate Judge concluded that Officer Copeland’s minimal use-of-force in effectuating Thompson’s arrest was objectively reasonable, and did not violate Thompson’s Fourth Amendment rights.

In the course of a felony arrest, may a police officer point a loaded gun at an unarmed suspect’s head, where that suspect had already been searched, was calm and compliant, was watched over by a second armed deputy, and was seated on the bumper of a police cruiser 10–15 feet away from a gun found in the suspect’s car? And if not, was the police officer entitled to qualified immunity from future lawsuits for police misconduct?

The Ninth Circuit held that pointing a loaded gun at the suspect’s head in these circumstances constitutes excessive force under the Fourth Amendment, but that the officers here are entitled to qualified immunity because the law was not clearly established at the time of the traffic stop.

“Our analysis involves two distinct steps,” said the Court of Appeals. “Police officers are not entitled to qualified immunity if (1) the facts taken in the light most favorable to the party asserting the injury show that the officers’ conduct violated a constitutional right, and (2) the right was clearly established at the time of the alleged violation.”

The Court reasoned that Officer Copeland’s use of force in arresting Thompson was not objectively reasonable. Officer Copeland pointed the gun at Thompson’s head and threatened to kill him if he did not surrender. This type and amount of force can hardly be characterized as minor, reasoned the Court. Furthermore, Thompson had no weapon and had already been searched. He was sitting on the bumper of a squad car, watched over by an armed deputy. He was not actively resisting arrest or attempting to evade arrest by
flight.

“Reviewing the totality of the circumstances, the force used against Thompson was excessive when balanced against the government’s need for such force. In the end, pointing guns at persons who are compliant and present no danger is a constitutional violation.”

Here, the Court reasoned that although the use of excessive force violated Thompson’s constitutional rights, Officer Copeland is entitled to qualified immunity because Thompson’s right not to have a gun pointed at him under the circumstances here was not clearly established at the time the events took place.

“Looking to the particular setup here, we cannot say that every reasonable officer in Copeland’s position would have known that he was violating the constitution by pointing a gun at Thompson,” said the Court of Appeals. “Thompson’s nighttime, felony arrest arising from an automobile stop, in which a gun was found, coupled with a fluid, dangerous situation, distinguishes this case from our earlier precedent.”

The Court reasoned that, more specifically, Copeland was conducting a felony arrest at night of a suspect who was not handcuffed, stood six feet tall and weighed two hundred and sixty-five pounds, was taller and heavier than Copeland, and had a prior felony conviction for unlawfully possessing a firearm. “Although Thompson was cooperative, the situation was still critical in terms of potential danger to the officers, especially given that a loaded gun was only 10–15 feet away,” said the Court. “Copeland did not violate a “clearly established” right as that concept has been elucidated by the Supreme Court in the excessive force context.”

The Court of Appeals concluded that because the law was not clearly established within the parameters dictated by the Supreme Court, Officer Copeland was entitled to qualified immunity. Therefore, the lower district court’s grant of summary judgment was AFFIRMED.

My opinion? Respectfully, I disagree with the Court of Appeals’ majority decision and agree with Justice Christen’s dissenting opinion.

“This decision squarely conflicts with the clear directive our court issued in Robinson v. Solano County, a case involving facts that, if distinguishable at all, posed a greater threat to officer safety,” said Justice Christen. Ultimately, she reasoned that Robinson recognized the critical distinction between pointing a gun at someone’s head and holding it in the “low ready” position.

“Deputy Copeland was justified in displaying some degree of force, but accepting the allegations in the complaint as true, he unquestionably used excessive force when he aimed his gun at Thompson’s head and threatened that if Thompson moved, he’d be dead.,” said Justice Christen. “Because that rule was clearly established long before Thompson was arrested, I respectfully dissent.”

Please contact my office if you, a friend or family member believe police used excessive force in any given situation. Police officers have difficult tasks. In recent years, however, the use of force by police officers making traffic stops has flared into a national debate of renewed importance. It’s imperative to seek legal counsel with knowledge and competence in this debate, and who may recover damages from the police officer’s liability.