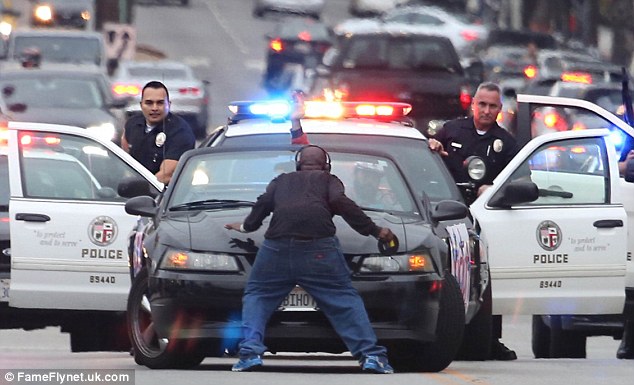 In United States v. Brown, the Ninth Circuit Court of Appeals held that an anonymous tip that a person saw a black male with a gun does not provide reasonable suspicion to make a Terry stop in Washington, where possession of a firearm is presumptively lawful.

Mr. Brown, who is a black man, had the misfortune of deciding to avoid contact with the police. Following an anonymous tip that a black man was carrying a gun—which is not a criminal offense in Washington State—police spotted Brown, who was on foot, activated their lights, and pursued him by car, going the wrong direction down a one-way street. Before flashing their lights, the officers did not order or otherwise signal Brown to stop. Brown reacted by running for about a block before the officers stopped him at gunpoint.

Police pursued Brown for one block before stopping him and ordering him to the ground at gunpoint. The officers placed Brown in handcuffs and found a firearm in his waistband. A further search revealed drugs, cash, and other items.

Police seized Mr. Brown even though there was no reliable tip, no reported criminal activity, no threat of harm, no suggestion that the area was known for high crime or narcotics, no command to stop, and no requirement to even speak with the police.

Brown moved to suppress the evidence from the searches, arguing that the officers lacked reasonable suspicion to stop him under Terry v. Ohio. The district court disagreed and denied the motion.

Whether police officers were justified in briefly stopping and detaining Mr. Brown.

The Court of Appeals reasoned that an an officer may only conduct a brief, investigatory stop when the officer has a reasonable, articulable suspicion that criminal activity is afoot.  Illinois v. Wardlow.

“Here, the lack of facts indicating criminal activity or a known high crime area drives our conclusion. The Metro officers who stopped Brown took an anonymous tip that a young, black man “had a gun”—which is presumptively lawful in Washington—and jumped to an unreasonable conclusion that Brown’s later flight indicated criminal activity. At best, the officers had nothing more than an unsupported hunch of wrongdoing.”

With that, the court reasoned that the circumstances of this case fails to satisfy the standard established by Terry and Wardlow. “The combination of almost no suspicion from the tip and Brown’s flight does not equal reasonable suspicion.”

Furthermore, the Court reasoned that in Washington State, it is lawful to carry a gun. Although carrying a concealed pistol without a license is a misdemeanor offense in Washington,  the failure to carry the license is simply a civil infraction.

Additionally, the Court of Appeals downplayed Brown running from police. “No one disputes that once the Metro officer activated his patrol car lights, Brown fled,” said the Court. “But the Supreme Court has never endorsed a per se rule that flight establishes reasonable suspicion. Instead, the Court has treated flight as just one factor in the reasonable suspicion analysis, if an admittedly significant one. “Notably, the officers did not communicate with Brown, use their speaker to talk with him, or tell him to stop before they flashed their lights and then detained him,” said the Court. “Under these circumstances, Brown had no obligation to stop and speak to an officer.”

My opinion? Good decision. Please read my Search and Seizure Legal Guide contact my office if you, a friend or family member are charged with a crime under circumstances where the police may have conducted an unlawful search or seizure. Hiring competent defense is the first and best step toward gaining justice.