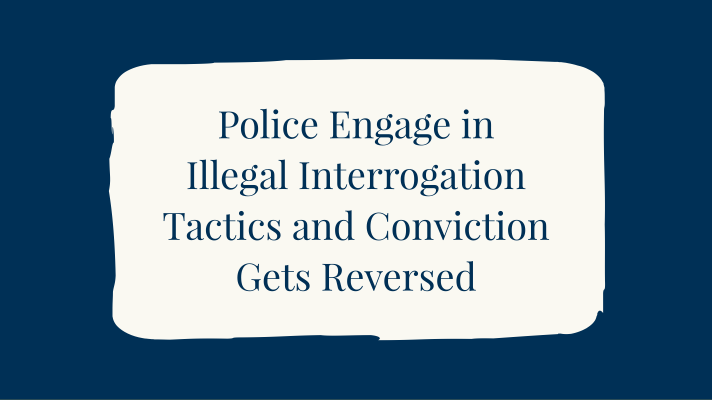 In State v. Rhoden, the WA Court of Appeals Division II held that the trial court failed to suppress Mr. Rhoden’s statements made to police during an improper two- step interrogation procedure.

The facts were such that on February 26, 2013, the Pierce County Sheriff’ s Department served a search warrant on a residence in Puyallup. Five occupants of the residence, including Rhoden, were handcuffed.

Two interrogations happened. The first interview happened when Deputy Olesen questioned the handcuffed occupants in the living room of the home. Importantly, he failed to advise the suspects of their constitutional rights under Miranda v. Arizona, 384 U.S. 436, 86 S. Ct. 1602, 16 L. Ed. 2d 694 ( 1966).

For those who don’t know Miranda warnings (often abbreviated to “Miranda“, or “Mirandizing” a suspect) is the name of the formal warning that is required to be given by police in the United States to criminal suspects in police custody (or in a custodial situation) before they are interrogated, in accordance with the Miranda ruling. Its purpose is to ensure the accused are aware of, and reminded of, various rights under the U.S. Constitution, and that they know they can invoke them at any time during the interview.

At any rate, Mr. Rhoden told Deputy Olesen there were drugs and a gun in the bedroom.  At that point, Deputy Olesen then escorted Rhoden to the kitchen and questioned him a second time and after finally advising Rhoden of his Miranda rights.

During the post –Miranda second interview, Deputy Olesen asked Rhoden the same questions that he had asked Rhoden in the living room before giving the Miranda warnings.

Mr. Rhoden said there was about a gram of methamphetamine located in the dresser on the left side of his bed and that he had been smoking methamphetamine for approximately the last two to three months. During a search, officers found several items in a dresser, including ( 1) small baggies containing a substance later tested and confirmed to contain methamphetamine, (2) an electronic scale, ( 3) glass smoking devices, and (4) documents containing Rhoden’ s name and the address of the residence being searched.

Rhoden was charged with one count of Unlawful Possession of a Controlled Substance (Methamphetamine) under RCW 69.50.401. Before trial, the trial court conducted a CrR 3. 5 hearing to determine the admissibility of Rhoden’ s statements to police.

On appeal, the legal issue was whether the Miranda warnings given to Rhoden during the second interrogation were effective to inform Mr. Rhoden of his Fifth Amendment right to keep silent when he had just provided the same incriminating information in the first interrogation for which he was not given Miranda warnings.

The court looked to Missouri v. Seibert, 542 U.S. 600, 604- 06, 124 S. Ct. 2601, 159 L. Ed. 2d 643 ( 2004) for guidance. In that case, the United States Supreme Court held that Miranda warnings were ineffective to inform the defendant of their right against self-incrimination in circumstances similar to these. As here, the warnings in Seibert were given only after the suspect had confessed during a custodial interrogation without Miranda warnings.

After reviewing Missouri v. Seibert, the court discussed the Seibert est. First, if a court determines that the use of the two- step interrogation procedure was deliberate, it then must ” determine, based on objective evidence, whether the midstream warning adequately and effectively apprised the suspect that he had a “genuine choice whether to follow up on his earlier admission.”

In making this determination, courts may consider whether any curative measures were taken to insure the suspect’ s understanding of his or her Miranda rights. Such curative measures may include a significant break in time and place between the pre- and post –Miranda questioning or an additional warning that the suspect’ s pre –Miranda statements could not be used against the suspect in a subsequent criminal prosecution.

The court compared the Missouri v. Seibert case to Mr. Rhoden’s facts. It reasoned that similar to Rhoden’s situation, the interrogating officers in Seibert questioned the defendant without Miranda warnings yet later gave Miranda warnings in a second interview before obtaining the suspect’ s confession without a significant break in time or place and without measures to assure the suspect that her non-Mirandized statements could not be used against her in a subsequent criminal prosecution.

Applying Seibert to the Facts

The Court then applied the two-part Seibert test the facts at hand. It reasoned that here, the police deliberately used the two- step interrogation procedure. During the initial interrogation in the living room before giving Miranda rights, Olesen asked the five handcuffed suspects whether there were any drugs in the home, and Rhoden admitted that he had a small quantity of methamphetamine in his bedroom. After completing his questioning of the group in the living room, Olesen escorted Rhoden to the kitchen, read Rhoden his Miranda rights, and repeated the same questions he had asked in the living room, to which Rhoden answered consistently with his responses given before receiving the Miranda warnings.

Thus, reasoned the court, the objective evidence of “the timing, setting and completeness of the pre-warning interrogation, the continuity of police personnel and the overlapping content of the pre and post-warning statements” all support the conclusion that the two- step interrogation procedure used here was deliberate.

The court applied the second inquiry, which examined the effectiveness of the midstream Miranda warnings. In this inquiry, the question was whether any curative measures were present, such as a significant break in time and place between the pre- and post -Miranda questioning or an additional warning that the suspect’ s pre –Miranda statements could not be used against the suspect in a subsequent criminal prosecution.

Here, the evidence at the CrR 3. 5 hearing showed that there was not a significant break in time or place between the pre- and post -Miranda interrogation. Perhaps more importantly, the evidence also showed that Olesen did not take any additional measures to insure that Rhoden understood his Miranda rights, such as advising him that his pre –Miranda statements could not be used against him. Accordingly, the Court of Appeals held that the trial court erred by failing to suppress Rhoden’ s post –Miranda statements.

Failure to Suppress Rhoden’s Statements Was Not Harmless Error

My opinion? Excellent decision. The Court of Appeals acknowledged the subtle – and unlawful – “2-Part Inquiry” of the arresting officer in this case. This technique is commonly used by law enforcement to unlawfully obtain statements from defendants and simultaneously circumvent Miranda. Good work, Court of Appeals!