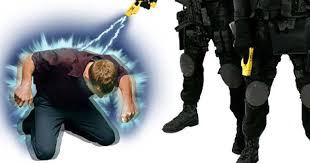 In Jones v. Las Vegas Metropolitan Police Dept., the Ninth Circuit Court of Appeals held that any reasonable officer would have known that continuous, repeated, and simultaneous tasings could only be justified by an immediate or significant risk of serious injury or death to officers or the public. However, such force generally cannot be used on a prone suspect who exhibits no resistance, carries no weapon, is surrounded by sufficient officers to restrain him and is not suspected of a violent crime.

In the early morning of December 11, 2010, Officer Mark Hatten of the Las Vegas Metropolitan Police Department pulled over Anthony Jones for a routine traffic stop. Hatten ordered Jones out of the car so he could pat him down for weapons. Jones obeyed at first but then started to turn toward Hatten. Scared of the much larger Jones, Hatten drew his firearm, pointed it at Jones and ordered him to turn back around. Instead, Jones sprinted away.

Hatten called for backup and pursued Jones. Hatten didn’t believe deadly force was necessary because Jones hadn’t threatened him and didn’t appear to have a weapon.

As he waited for other officers to arrive, Hatten used his taser to subdue Jones. Hatten fired his taser twice, causing Jones’s body to “lock up” and fall to the ground face down with his hands underneath him. Hatten proceeded to kneel on Jones’s back in an attempt to handcuff Jones, keeping his taser pressed to Jones’s thigh and repeatedly pulling the trigger.

Hatten continued to tase Jones even after backup arrived. Backup consisted of four officers: Richard Fonbuena on Hatten’s right side, who helped handcuff Jones; Steven Skenandore, who controlled Jones’s legs and feet; Timothy English at Jones’s head, who applied a taser to Jones’s upper back; and Michael Johnson, who arrived last and ordered the tasing to stop. Johnson wanted his officers to “back off on the tasers so that Jones’s muscles would relax.” According to Johnson, Jones “didn’t look like he was physically resisting” and there were “enough officers” to take Jones into custody.

In all, Jones was subjected to taser shocks for over ninety seconds: Hatten tased Jones essentially nonstop that whole time—with some applications lasting as long as nineteen seconds—and, for ten of those seconds, English simultaneously applied his taser.

Once the officers stopped tasing Jones, his body went limp. They sat him up but Jones was nonresponsive and twitching; his eyes were glazed over and rolled back into his head. The officers tried and failed to resuscitate him. Jones was pronounced dead shortly thereafter. The coroner’s report concluded that “police restraining procedures”—including the tasings—contributed to Jones’s death.

Jones’s parents sued the Las Vegas Metropolitan Police Department and all of the officers involved in restraining Jones. They alleged Fourth and Fourteenth Amendment violations as well as various state law torts. However, the lower district court granted summary judgment for the defendants on all claims. The plaintiff’s appealed.

Whether police officers are entitled to qualified immunity when they’re alleged to have caused the death of a suspect by using tasers repeatedly and simultaneously for an extended period.

As a preliminary matter, the Court of Appeals held that under Fed. R. Civ. P. 17, the lower district court abused its discretion by failing to give plaintiffs a reasonable opportunity to substitute the proper party and thus cure the defective complaint.

Next, the Court of Appeals addressed the issue of whether the officers were reasonable in the degree of force they deployed. They held that the officers’ repeated and simultaneous use of tasers for over ninety seconds was unreasonable and that a jury could reasonably conclude that the officers knew or should have known that these actions created a substantial risk of serious injury or death:

” . . . any reasonable officer would have known that continuous, repeated, and simultaneous tasings could only be justified by an immediate or significant risk of serious injury or death to officers or the public.”

The Court also reasoned that that such force generally cannot be used on a prone suspect who exhibits no resistance, carries no weapon, is surrounded by sufficient officers to restrain him and is not suspected of a violent crime. Furthermore, it reasoned that given that there was clearly established Fourth Amendment law and a jury could reasonably conclude that the officers used excessive force, the question of qualified immunity must proceed to trial.

Furthermore, the Court held that the plaintiff’s state law battery and negligence claims were triable, and should not have been dismissed by the lower district court. It said that while there was no evidence that any of the officers acted out of hostility or improper motive, there was a factual dispute as to whether the repeated and simultaneous tasings were so excessive under the circumstances that they amounted to willful or deliberate disregard of Jones’s rights. The Court of Appeals therefore remanded plaintiffs’ battery and negligence claims.

In a twist, however, The Court of Appeals affirmed the lower district court’s dismissal of the
Fourteenth Amendment claim. It said that even assuming all the facts Plaintiffs alleged, there was no evidence that the officers acted with a purpose of harming Jones that was unconnected to a legitimate law enforcement objective.

In another twist, the Court of Appeals held that the Plaintiffs’ false arrest and false imprisonment claims failed because there was no evidence that the decision to arrest Jones lacked justification, let alone that it was made in bad faith. The Court of Appeals therefore affirmed the dismissal of that claim.

My opinion? A well-reasoned, good decision. Although the Court of Appeals upheld the dismissal of some of the Plaintiffs’ claims due to lack of evidence, the Court was ultimately convinced that the officers’ repeated and simultaneous use of tasers for over ninety seconds was unreasonable. Good decision.