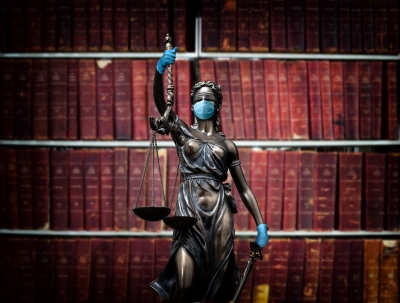 In a press release, the Washington Courts describe the huge strides they’ve taken to keep courts accessible and safe during the pandemic. And in doing so, the judiciary learned a great deal about everyday challenges to equity and accessing justice for state residents. WA Supreme Court Chief Steven C. González addressed the matter in a joint session of the state Legislature.

“The pandemic made clearer than ever the inequities within our justice system, but by making them more visible, the pandemic also made them more addressable,” ~WA Supreme Court Chief Steven C. González.

The speech was broadcast live and recorded by TVW. A written State of the Judiciary report was released to lawmakers, judicial branch leaders and the public following the oral address.

González highlighted some key work and responses by the judicial branch to challenges and revelations:

“We’ve travelled far along the road to justice, and we still have more to go . . . We need your help to continue that progress. I look forward to working with all of you to fulfill the great promise of our  nation of equal justice for all.” ~WA Supreme Court Chief Steven C. González.

My opinion? The COVID-19 pandemic has further exposed and exacerbated inequities in our justice system. Our courts and legal service providers have been forced to curtail in-person operations. This has occurred often without the resources or technology to offer remote-access or other safe alternatives. Fortunately, our courts have takes impressive strides forward and effectively pivoted under the circumstances.