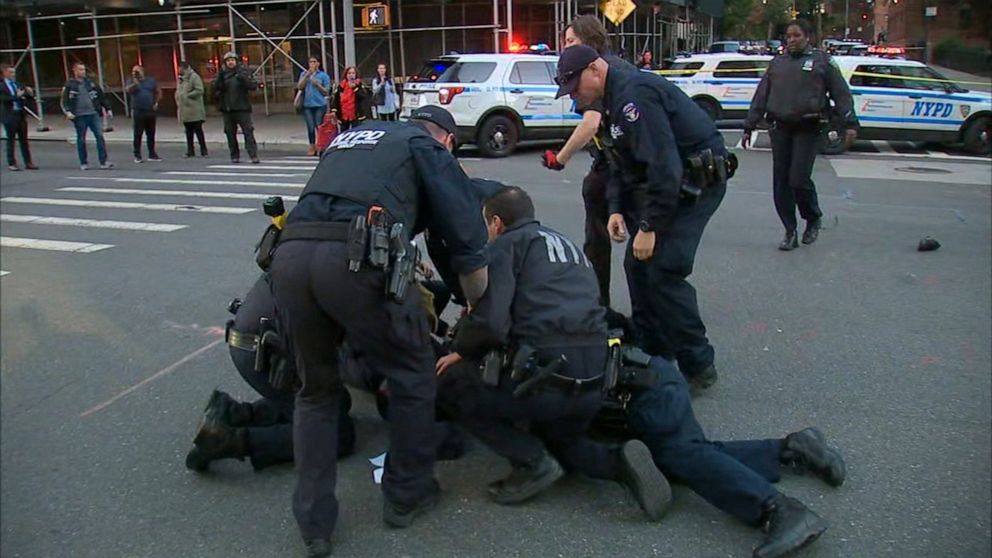 In State v. Pines, the WA Court of Appeals held that police officers exceeded the scope of a Terry Stop when, with no observations or information from which to believe the suspect was carrying a weapon, they followed the suspect into a restaurant, tackled him to the ground, held him down by the neck and head, and handcuffed him.

On March 23, 2018, Officer Sausman was in his vehicle when he identified the defendant Mr. Pines driving a black BMW. Sausman recognized Pines and was aware that Pines had a warrant for Residential Burglary and Domestic Violence charges. Sausman also knew that Pines was previously convicted of a felony.

Sausman followed Pines to Columbia City, where Pines parked his vehicle and entered a Pagliacci Pizza restaurant. Sausman advised the uniformed arrest team that Pines was in the restaurant.

Detective Miller was one of three uniformed officers that entered the restaurant to contact Pines. As the officers entered, Pines began moving toward the other door. The officers tackled Pines to the ground, holding him down by the neck and head, and handcuffed him. The officers then frisked Pines and found a handgun in his jacket pocket. The State charged Pines with Unlawful Possession of a Firearm in the First Degree.

Pines moved to suppress the handgun during a pretrial CrR 3.6 hearing. The trial court denied Pines’s motion to suppress. Later, during a bench trial, the trial court found Pines guilty and imposed a sentence of 24 months in prison.

Pines appealed on arguments that that the trial court erred in finding that the search and discovery of his firearm was a lawful Terry Stop, and thus denying his motion to suppress. Pines contends that his seizure amounted to a custodial arrest and that the police lacked probable cause at the time of his arrest.

The Court of Appeals said that under the Washington Constitution, warrantless searches are per se unreasonable unless one of the narrowly drawn exceptions to the warrant required applies. Furthermore, said the court, if the evidence was seized without authority of law, it is not admissible in court. Finally, it reasoned that a person is seized when an officer, by physical force or show of authority, restrains the person’s freedom of movement. The restraint must be such that a reasonable person would not believe they were free to leave.

“The State argues, and the trial court agreed, that Pines’s seizure and subsequent search was the result of a valid Terry Stop,” said the Court of Appeals. “We disagree.”

The Court of Appeals elaborated that under Terry v. Ohio, a police officer may temporarily detain a person based on a reasonable suspicion that the person is or has been involved in a crime.

The Court relied on State v. Mitchell  – an important Washington case on Terry Stops – to determine whether the officer’s interactions with Mr. Pines was lawful:

“Here, in stark contrast with Mitchell, the arresting officers did not observe Pines carrying a weapon. Indeed, as Detective Miller testified, they had no reason to contact Pines except for their belief that he might have a warrant.

Further, unlike Mitchell, where the officer was alone at night, there were three uniformed police officers along with Detective Sausman at the scene. No officer testified that they feared for their safety prior to Pines’s seizure or that they had seen a weapon prior to their search. And finally, unlike Mitchell where the defendant was told to lie down without contact from the officer, the three uniformed officers forcefully took Pines to the ground and handcuffed him, while Detective Sausman yelled that Pines was under arrest on a felony warrant.” ~WA Court of Appeals

With that, the WA Court of Appeals held that a reasonable person in Pines’s situation would consider themselves under custodial arrest. “Pines’s seizure exceeded the scope of a valid Terry Stop. The trial court erred in concluding the search was valid under Terry.”

The Court of Appeals also reasoned that although the officer’s knowledge of a month-old arrest warrant would support a properly limited Terry detention, it was insufficient to provide probable cause for arrest.  “The month gap between the officer learning of the arrest warrant and the arrest was too long – the suspect could have been arrested and posted bail during the 30-day interval,” said the Court.

Please contact my office if you, a friend or family member are charged with a crime involving Search and Seizure. Hiring an effective and competent defense attorney is the first and best step toward justice.