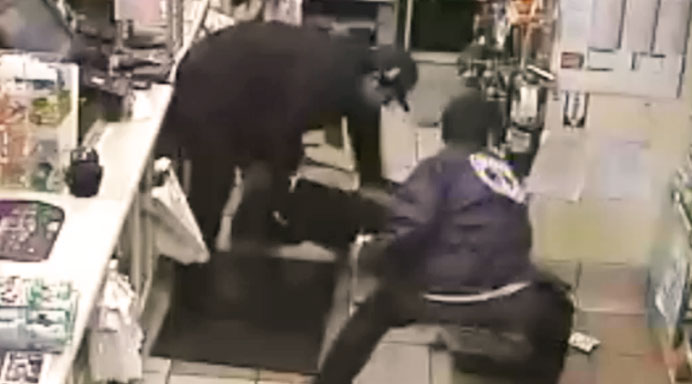 I’m often asked by Clients, “Why can’t you make the Prosecution get video surveillance evidence from crime scene?” This recent case explains why.

In State v. Armstrong, the WA Supreme Court held that the Prosecutor’s failure to obtain a copy of the AM/PM store’s surveillance video prior to the store’s destruction of the video pursuant to the store’s policy, did not violate the defendant’s due process rights.

A no-contact order existed prohibiting Defendant Dennis Armstrong from contacting his former partner, Nadia Karavan. Nonetheless, on April 20, 2014, they agreed to meet at a bus stop in violation of the No-Contact Order. As the two talked, Armstrong became angry. He yelled and hit the wall of the bus stop shelter. Armstrong then hit Karavan twice in the face with an open fist.

Officers responded to the 911 call. Officer Martin noticed that Karavan had a slightly swollen, red abrasion on the side of her face.

The State charged Armstrong with a domestic violence felony violation of a court order.

Before trial and again during trial, Armstrong moved to discharge his counsel. One of his reasons was that counsel failed to give him the surveillance video as he requested. The prosecutor told the court that the State had never possessed the video. The court denied Armstrong’s motions.

At trial, Hawkins (the AM/PM employee) testified that there were about 16 cameras around the store: a few of which covered the gas pumps and one that may have shown a slight, low view shot of the bus stop. Although Hawkins testified that police had requested surveillance video from AM/PM in the past, no officer requested footage from the night of this incident. Hawkins had previously reviewed the video from that night and testified that it showed what he described in his testimony, but per AM/PM policy, the video had since been destroyed.

The jury returned a general guilty verdict despite the lack of surveillance video evidence.

On appeal – and with other arguments, Armstrong claimed that the police violated his right to due process because they failed to collect video surveillance from the AM/PM after using that video as a tool when interviewing Armstrong at the scene.

Ultimately, the Court held that Armstrong failed to show that the police acted in bad faith when they did not collect video surveillance that was only potentially useful evidence.

The Court reasoned that under the Fourteenth Amendment to the federal constitution, criminal prosecutions must conform with prevailing notions of fundamental fairness, and criminal defendants must have a meaningful opportunity to present a complete defense. Consequently, the prosecution has a duty to disclose material exculpatory evidence to the defense and a related duty to preserve such evidence for use by the defense.

The court also reasoned that although the State is required to preserve all potentially material and favorable evidence, this rule does not require police to search for exculpatory evidence. And in order to be material exculpatory evidence – that is, evidence which has value to the defense of which can alter or shift a fact-finder’s decision on guilt or innocence – the evidence must both possess an exculpatory value that was apparent before it was destroyed and be of such a nature that the defendant would be unable to obtain comparable evidence by other reasonably available means.

Finally, the court reasoned that the police’s failure to preserve “potentially useful evidence” was not a denial of due process unless the suspect can show bad faith by the State. The presence or absence of bad faith turns on the police’s knowledge of the exculpatory value of the evidence at the time it was lost or destroyed. Also, acting in compliance with its established policy regarding the evidence at issue is determinative of the State’s good faith.

“Armstrong asserts that the video surveillance was potentially useful evidence,” said the Court. “Therefore, he must show that the police acted in bad faith.” According to Armstrong, the police acted in bad faith because they told him during the interview that they were going to collect the video but they never actually collected it. Armstrong describes this as the police acting with an “extreme cavalier attitude” toward preserving potentially useful evidence. The Court further reasoned that beyond this failure to collect the video, Armstrong offers no evidence of bad faith, such as improper motive.

“Armstrong has failed to show that the police acted in bad faith when they failed to collect the surveillance video from the AM/PM. The testimony of the officers indicates that the video went uncollected due to mere oversight. Armstrong has presented no evidence that the police had an improper motive. At most, Armstrong has shown that the investigation was incomplete or perhaps negligently conducted, but that is not enough to show bad faith.”

With that, the Court upheld his conviction.

My opinion? I understand the Court’s opinion insofar as the Prosecution should not be burdened with providing exculpatory evidence, especially if that evidence is unimportant – or not material – to the larger issues of guilt.

However, I would object to the AM/PM employee  discussing the  video as facts that are not admitted into evidence. Under this objection when the attorney claims that “the question assumes facts not in evidence,” what he is really saying is that the facts that are being presented to the witness are presumably not yet in evidence and therefore, how can this witness properly answer the question if those facts have not been put before this jury?