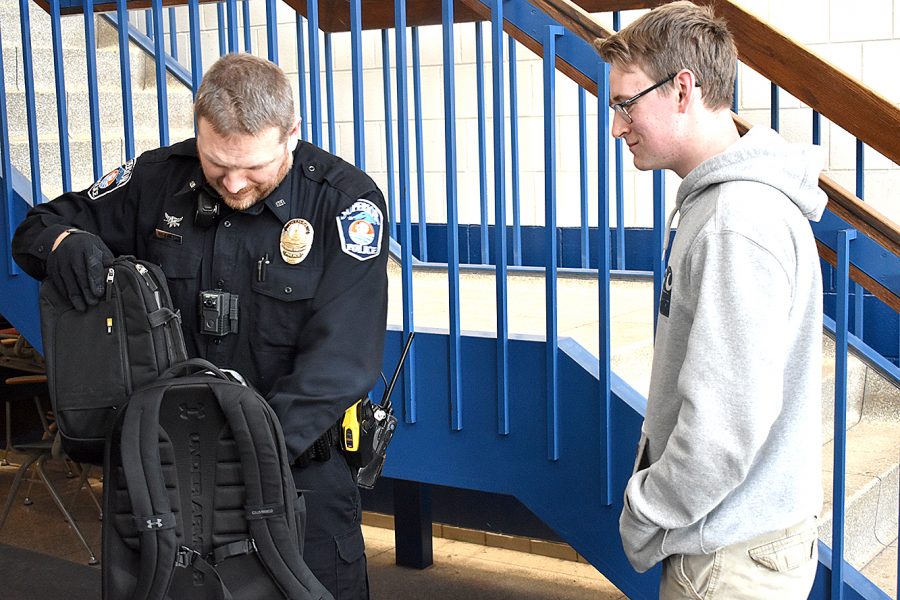 In State v. Dunham, the WA Court of Appeals Division II decided that a warrantless search of a suspect’s locked backpack pocket was a lawful inventory search where the defendant was booked into jail, a search of his person produced knives, the backpack was to be logged into the jail’s temporary storage area and the officer felt knives on the outside of the backpack.

On January 29, 2014, Sergeant Gwen Carrell of the Chehalis Police Department responded to a reported shoplifting at a local department store. Upon arrival, Sgt. Carrell met with loss prevention officers. They told Sgt. Carrell that defendant Jason Dunham had multiple knives in his backpack and that they had removed the backpack from Dunham’s reach. Sgt. Carrell placed Dunham in handcuffs for officer safety and searched him for weapons. She located two more knives on Dunham’s person, arrested Dunham for theft and booked him into jail.

Sgt. Carrell searched Dunham’s backpack for items to be logged into the jail’s temporary storage. This is called an inventory search. In short, it is every police department’s policy to inventory items to be held in its storage facility for any dangerous items. As part of this policy, knives are to be kept in secure containers, preventing them from puncturing anything.

Sgt. Carrell used Dunham’s keys to unlock the backpack pocket. She opened the pocket and observed a flashlight, a butane torch, and a glass pipe. What Sgt. Carrell thought was a knife was actually the butane torch. The residue in the glass pipe tested positive for methamphetamine. The State charged Dunham with Possession of a Controlled Substance and Theft in the Third Degree.

Dunham filed a motion to suppress the evidence found during Sgt. Carrell’s search of the locked portion of his backpack pursuant to CrR 3.6, arguing that the search violated his constitutional rights. The trial court denied the motion and ruled that the inventory search was valid. Later, the trial court found him guilty on both counts at a bench trial.

Dunham appealed. He argued that the warrantless search of his backpack’s locked pocket violated the Fourth Amendment to the United States Constitution and article I, section 7 of the Washington Constitution. He claims that the search was not a valid inventory search.

Unfortunately for Dunham the Court of Appeals disagreed. First it reasoned that  inventory searches are an exception to the requirement that police have a warrant to search people’s personal property. Second, the Court described the purpose of an Inventory Search:

Third, the Court reasoned that Officer Carrel’s safety concern about potentially exposed knives in the locked pocket was reasonable based on the facts that (1) several knives were found on Dunham’s person, (2) additional knives were found in the unlocked portion of Dunham’s backpack, (3) one of the knives found in the backpack was unsheathed, and (4) Sgt. Carrell felt what she believed to be another knife in the locked pocket of the backpack. Therefore, a manifest necessity existed for searching the locked portion of the backpack.

Finally, the Court concluded that the inventory search was valid and affirmed Dunham’s conviction:

“Substantial evidence supports the challenged finding of fact. Given the reasonable indication that the locked portion of the backpack contained dangerous items along with Sgt. Carrell’s reasonable fear of being stabbed, we hold that a manifest necessity existed to search No. 46169-2-II 8 inside the locked portion of the backpack. Therefore the trial court’s findings of fact support its conclusion that the inventory search was valid. We affirm Dunham’s conviction.”

My opinion? Search and seizure issues are a HUGE aspect of unlawful possession cases. The legal issues come down to whether the search was lawful, and if not, whether the evidence can be suppressed. Here, the court’s decision appears sound. Under Washington law, officers may search a suspect’s person if they feel “hard and sharp” objects through the outside of a suspect’s clothing. This is done for officer safety. Similarly, Inventory Searches are conducted under the same policy of preserving officer safety. Here, the hard and sharp objects felt through Dunham’s backpack raised a safety concern. Therefore, the search appears lawful.

For more information, please review my Legal Guide titled, “Search & Seizure: Basic Issues Regarding Their Search for Weapons, Drugs, Firearms and Other Contraband.” There, I provide links to my analysis of Washington cases discussing searches of persons, vehicles, cars and homes. Also, please go the search engine of my Blog if you have specific queries about these issues.