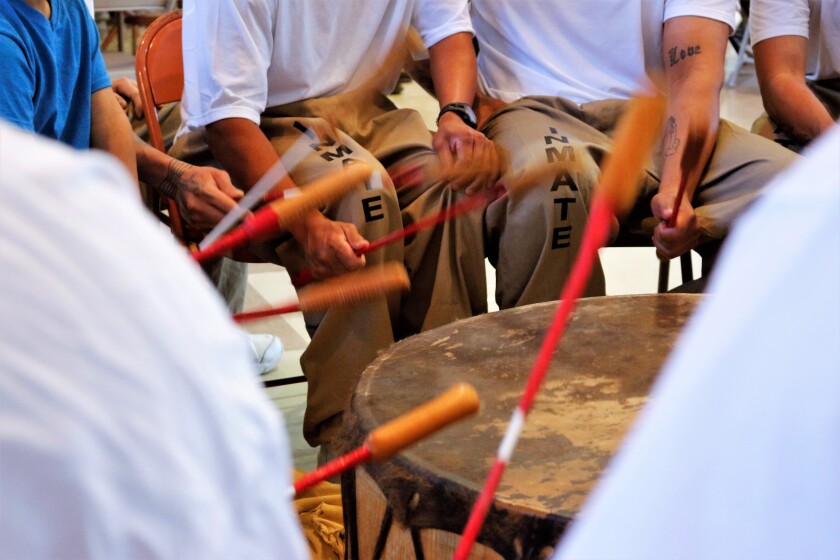 Journalist Karina Brown reports in Undersore News that Native American prisoners at the State Penitentiary hosted their first powwow in three years. This reunites a 50-year tradition temporarily halted by the Covid-19 Pandemic.

“Today is a big day, to be able to see our families,” said Yakama inmate Tallon Saluskin. “And to get to show love.”

Thirty-seven Indigenous inmates and 75 guests attended the first of 22 powwows scheduled for September and October in Washington state prisons. It was the first time the Washington State Department of Corrections (WDOC) allowed an outdoor powwow in a medium-security prison. There was drumming and dancing, plus a feast of salmon, buffalo stew and fry bread. Late in the afternoon, prisoners presented handmade gifts to nearly every attendee.

The lack of powwows, sweat lodges and other Native American religious ceremonies during the pandemic made a difficult time period even harder. That painful stretch of time without religious ceremonies ended sooner for prisoners who participated in other religions. But Native Americans are incarcerated in the United States at higher rates than any other racial category, after African Americans. Though they make up 1.9% of the population of Washington State, nearly 5% of the people jailed in state prisons in Washington are Native American.

Restrictions under the pandemic caused an absence of ceremony comparable only to one other period of time at least 50 years ago.

In 2010, the WDOC sharply curtailed the Indigenous faith practices it allowed. At issue were budget cuts and a dispute over whether to allow children to attend powwows. But the religious rights of Indigenous prisoners are protected under the First Amendment, the American Indian Religious Freedom Act of 1978 and rulings from the U.S. Supreme Court including the 1979 case Bell v. Wolfish, which found that prisoners “do not forfeit all Constitutional protections by reason of their conviction and confinement in prison.”

Ten tribes petitioned the governor for a reversal of the 2010 policies, but it took over two years for the WDOC to restore Native prisoners’ religious rights.

My opinion? This tradition brings healing and strength. And society must recognize that the rehabilitation of inmates would be enhanced if their religious and cultural practices were permitted.