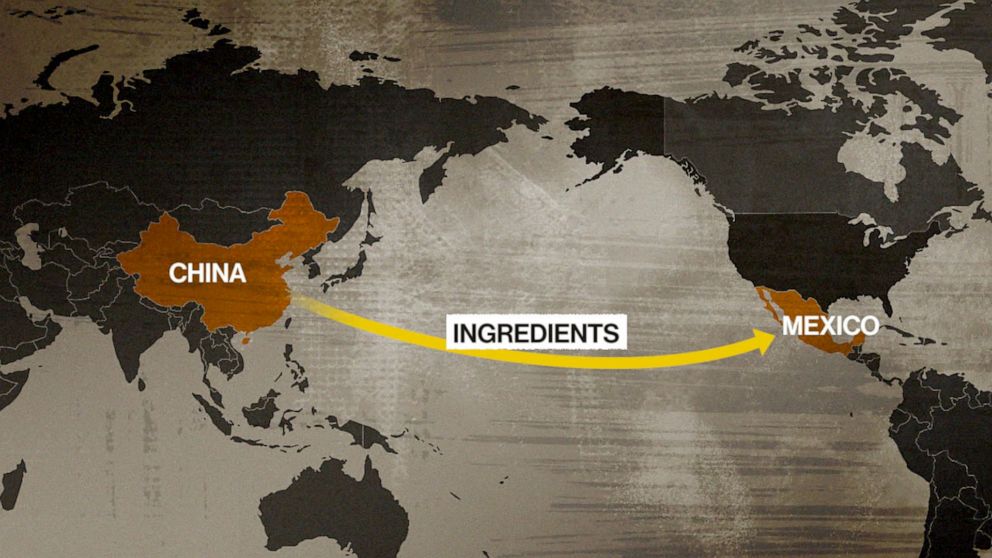 Intriguing WSJ article by Brian Spegele discusses how Chinese chemical companies are producing more ingredients for illegal fentanyl than ever. Consequently, this has strained relations between Beijing and Washington are undermined efforts to stop the flow.

Among the available products are compounds with obscure names such as N-Phenyl-4-piperidinamine, which Mexican cartels purchase to make into fentanyl. The opioid has become the most deadly illegal drug the U.S. has ever seen.

WHY HAS THIS HAPPENED?

In 2018, China restricted the production and sale of two of the most common ingredients for the drug. This move won it praise from the U.S. Since then, the U.S. has adopted a tougher posture toward China. Simultaneously, China has also grown more assertive about defending its interests. As a consequence, the cooperation on combating the drug trade has broken down.

Since then, the flow of Chinese chemicals to Mexican drug cartels has created a major challenge in the U.S.-China relationship.

CHINA’S RESPONSE TO THE ACCUSATIONS.

China places the blame squarely on the U.S. “As a matter of fact, it is the U.S. that has undermined China-U. S. counter-narcotics cooperation,” said Liu Pengyu, a spokesman for China’s embassy in Washington.

China has also said the U.S. should address its drug crisis by curbing demand. “The U.S. must look squarely at its own problem instead of deflecting blame,” said Foreign Ministry spokesman Wang Wenbin at an August news conference.

China’s government considers biopharmaceuticals an important economic driver and has no incentive to overregulate the sector.

Accoring to the article, chemical companies in China target Mexican buyers online. The companies say they accept payment in cryptocurrency, and they use encrypted channels to talk with customers.

Some Chinese nationals working with cartels moved to Mexico and adopted local names as part of money-laundering rings, say federal prosecutors. One such network funneled drug proceeds from New York through China’s banking system and ultimately to Mexico.

The U.S. has charged Chinese citizens whom prosecutors accuse of helping cartels supercharge the fentanyl trade. Because the countries have no extradition treaty, some of the accused remain at large.

ULTIMATUMS FROM THE UNITED STATES TO CHINA.

U.S. officials say they have urged China to take three steps to constrict the fentanyl trade: (1) require Chinese companies to know the identities of customers before shipping chemicals; (2) ensure that such shipments are properly labeled for customs inspectors; and (3) create a system to track shipment volumes and trends.

Homeland Security agents and Mexican authorities stopped about 24,000 pounds of cutting agents coming from China to dilute high-purity fentanyl synthesized by cartels in Mexico in October 2020. Agents also blocked 1,600 pounds of 4-AP coming into Mexico from China and 1.5 million pounds of ingredients for meth from China and India, in 2021 and 2022.

Agents traced the chemicals to high-level buyers inside a Mexican cartel. The transactions, through brokers and shell companies, were arranged so the chemical makers in China might not have known who bought the chemicals in Mexico.

My opinion? Unfotunately, this news reveals how high-level politics have globalized the drug trade of Fentanyl into the U.S. Fentanyl is the deadliest drug threat facing this country. It is a highly addictive man-made opioid that is 50 times more potent than heroin. Just two milligrams of fentanyl, the small amount that fits on the tip of a pencil, is considered a potentially deadly dose.

That said, Washington has legalized the possession of small amounts of drugs. In March 2021, the WA supreme court threw out the existing felony drug law in its “Blake” decision. Consequently, possessing small amounts of drugs including heroin, methamphetamine, fentanyl and cocaine has effectively been decriminalized in Washington. Therefore, simply because you’re caught with drugs doesn’t mean you’re selling drugs, which is still illegal.