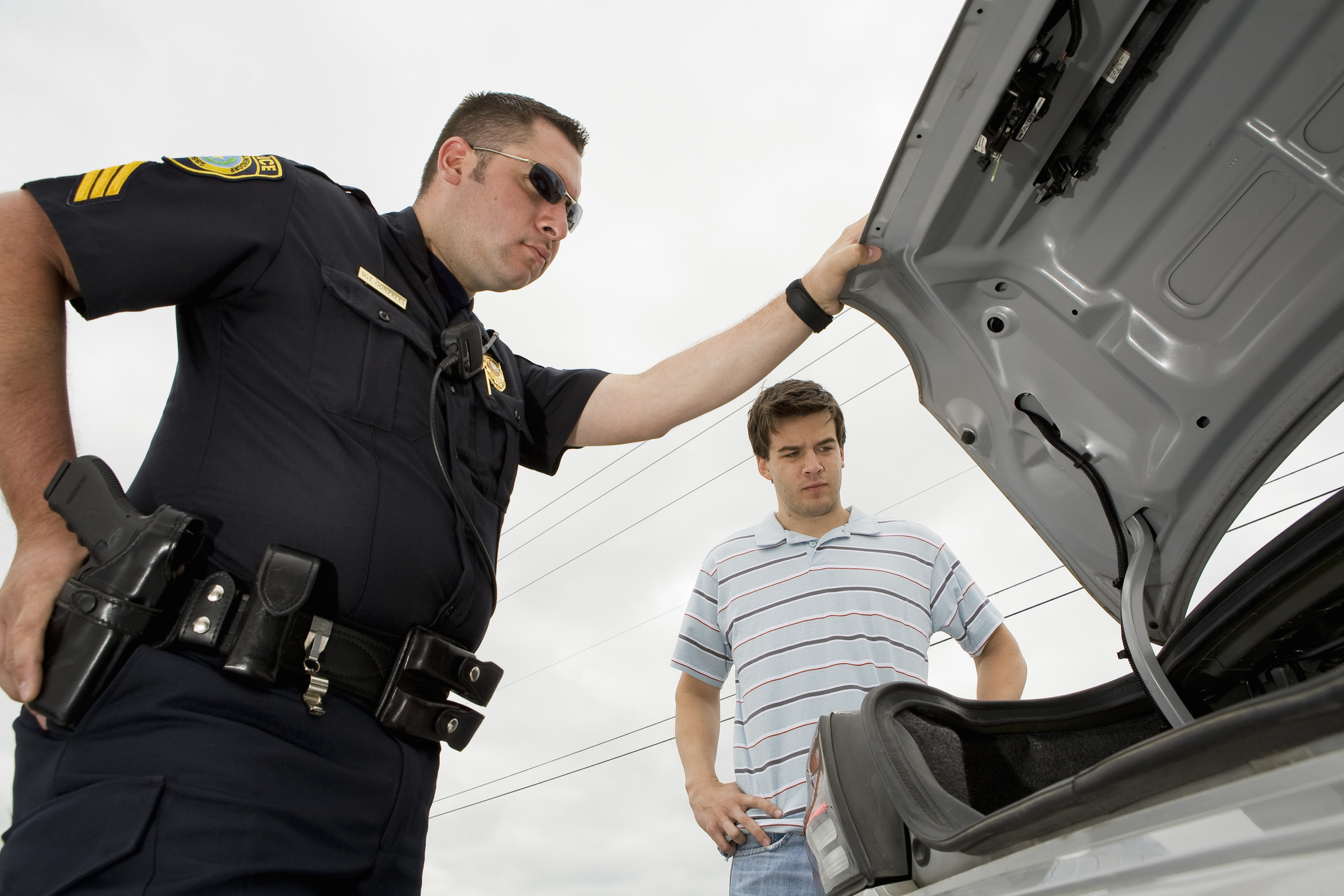 In State v. Vanhollebeke, the WA Supreme Court held that a driver’s refusal to consent to the search of his or her vehicle must generally be respected. But where the facts reasonably raise a significant question about whether the driver had any legitimate claim to the vehicle at all, the police may contact the absent owner and then get that owner’s consent to search instead.

Defendant Justin Vanhollebeke drove his truck the wrong way down a one-way street. Not surprisingly, an officer stopped him. Vanhollebeke ignored the officer’s command to stay in the vehicle, got out and locked the vehicle behind him, left a punched out ignition and apparent drug paraphernalia behind in plain view of the police, and had no key. The police asked Vanhollebeke for consent to search the vehicle. Vanhollebeke refused. A police officer then contacted the truck’s owner, received the absent owner’s consent and a key to search, and then returned to search the vehicle.

Vanhollebeke was charged with unlawful possession of a firearm found in the truck.

Vanhollebeke moved to suppress the fruits of the search, arguing that the warrantless search was unconstitutional. The trial court denied the motion, reasoning that there’s a reduced expectation of privacy in a borrowed vehicle. The trial court made no explicit findings of fact regarding the officers’ motivation for contacting Mr. Casteel. Vanhollebeke was found guilty, sentenced to 34 months confinement, and assessed fees of $1,380. He appealed on the issue of whether the search was constitutional.

The WA Supreme Court reasoned that warrantless searches are presumptively unconstitutional, unless they fit within one of the few, narrow exceptions to the warrant requirement. Under both the Washington and United States Constitutions, warrantless searches are per se unreasonable. However, there are a few jealously and carefully drawn exceptions to the warrant requirement.

“One of those exceptions is for consent, and consent is the exception at issue here,” said the Court. It elaborated that consent to a search establishes the validity of that search if the person giving consent has the authority to so consent. Furthermore, the Court reasoned that while the driver of an absent owner’s vehicle does not ordinarily assume the risk that the absent owner will consent to a search, the driver does assume that risk where the facts reasonably suggest it is stolen.

Next, the Court adopted and applied the Fourth Amendment standard for valid third-party consent to a search is a two-part test: (1) Did the consenting party have authority to permit the search in his own right? And if so, (2) did the defendant assume the risk that the third party would permit a search? Both this Court and the United States Supreme Court refer to this test as the “common authority rule.” In short, the common authority rule refers to a legal principle that permits a person to give consent to a law officer for the purpose of searching another person’s property. The common-authority rule provides for searches without warrant. The principle can be applied only when both parties have access or control to the same property.

The Consenting Party Had Authority to Permit the Search.

Vanhollebeke, by Borrowing Casteel’s truck, Assumed the Risk that Casteel Might Allow Others to Search It.

The Court held that the evidence in this case gave the officers good reasons to believe the vehicle was stolen. This driver, without a key or identification and with a punched out ignition clearly visible, therefore assumed the risk that the police would contact the absent owner and seek consent to search.

The Court elaborated that this reasoning is consistent with the reasoning in the United States Supreme Court’s “common authority” cases that legitimation of expectations of privacy by law must have a source outside of the Fourth Amendment, either by reference to concepts of real or personal property law or to understandings that are recognized and permitted by society.

“The search in this case did not violate the Fourth Amendment,” concluded the Court. In State v. Rooney, the WA Court of Appeals Division II gave interesting results on a multi-layered search & seizure case. First, an officer who lawfully entered a parolee’s room in order to arrest him, properly conducted a Terry frisk of a roommate’s pair of pants before giving them to the roommate. The frisk was justified by the presence of several swords, an axe and multiple knives in the room. However, the officer’s search of a room over the objection of the roommate, who was not on community custody, violated the roommate’s Constitutional rights.

Alexandria White, who was serving a term of community custody, began living with the defendant, Norman Rooney, in his home in December 2013 shortly after her release from prison. Her parole officer Chris Napolitano supervised White’s community custody. Napolitano knew that Rooney and White had lived together like a married couple and they had always lived in the same room together.

After White moved in with Rooney again that December, Napolitano discovered White had changed her address without notifying him, which violated her community custody conditions.

Napolitano obtained an arrest warrant for White and, with a team of law enforcement officers, went to Rooney’s house to arrest her on December 30, 2013. As Napolitano walked into the bedroom, White was standing in the bedroom with Rooney, who appeared to be asleep in bed. Napolitano observed swords and axes hanging on the bedroom wall and a couple of knives laying on the shelves. He observed additional weapons on Rooney’s nightstand. Napolitano advised White that by failing to report her new address and not being available for contact she had violated her community custody. White acknowledged that Napolitano would arrest her for the violation.

Rooney, who was dressed in what appeared to be boxer shorts, asked to put on pants. Napolitano replied that he would have to search the pants “for safety reasons” before Rooney could put them on and leave the room. Given the other weapons in the room, Napolitano was concerned that Rooney might have a weapon in the pants. Rooney grabbed a pair of pants, and when Napolitano took hold of the pants, he immediately felt a firearm.

After Rooney was arrested and placed in the living room, Napolitano and Harvey searched the bedroom and found methamphetamine, heroin, and clonazepam. The State charged Rooney with three counts of Unlawful Possession of a Controlled Substance (methamphetamine, heroin, and clonazepam) and one count of First Degree Unlawful Possession of a Firearm. Rooney moved to suppress evidence of the controlled substances and the firearm. The trial court denied Rooney’s motion and found him guilty as charged at a bench trial. On appeal, Rooney argues that the trial court erred when it denied his motion to suppress.

The Court of Appeals reasoned that warrantless searches and seizures are generally unreasonable and violate the Fourth Amendment of the United States Constitution and article I, section 7 of the Washington Constitution. However, consent is one well-recognized exception to this rule. The State bears the burden of proving by clear and convincing evidence that a warrantless search falls into one of the exceptions to the warrant requirement.

The Court further reasoned that, in searches involving a cohabitant who consents to a warrantless search, Washington has adopted the Common Authority Rule; which says that a cohabitant may grant consent to search a residential area that each cohabitant has equal authority to control. This rule is based on the Washington Constitution’s guarantee of each individual’s expectation of privacy and the theory that a person assumes risk that his or her cohabitant may allow “outsiders” into a shared space.

Finally, the Court reasoned that the consent of only one person with common authority over the place to be searched when multiple cohabitants are present is NOT sufficient to conduct a lawful search of shared space.  “We have never held that a cohabitant with common authority can give consent that is binding upon another cohabitant with equal or greater control over the premises when the non-consenting cohabitant is actually present on the premises,” said the Court. “When a cohabitant who has equal or greater authority to control the premises is present, his consent must be obtained and the consent of another of equal or lesser authority is ineffective against the non-consenting cohabitant.”

With that, the court held that under application of the common authority rule, because Rooney was present and objected, the officers’ search of Rooney’s room was unlawful. The fact that White was serving a community custody term does not undermine Rooney’s right to object to a warrantless search of his bedroom. Therefore, the officers’ warrantless search of Rooney’s bedroom was unlawful as to Rooney, and the trial court erred in denying Rooney’s motion to suppress the methamphetamine, heroin, and clonazepam evidence found during the unlawful search.

Regarding the frisk of Rooney’s pants, the Court of Appeals reached an entirely different decision. They decided the trial court did not error in denying Rooney’s motion to suppress evidence of the firearm found in Rooney’s pants. The Court reasoned that an officer may conduct a non-consensual protective Terry frisk for weapons if the officer can articulate specific facts that create an objectively reasonable belief that the person is armed and dangerous. The officer need not be certain that the person is armed before he or she conducts a protective frisk.

Here, Napolitano and other law enforcement officers saw “several swords, an axe, and multiple knives” in Rooney’s bedroom. Because he was aware of the number of weapons, Napolitano was concerned for his safety. Also, Rooney’s behavior following Napolitano’s warning that the pants would be searched, together with Napolitano’s observation of the weapons in plain view in his bedroom, gave Napolitano articulable suspicion that the pants Rooney wanted to wear might have contained a weapon.

The court concluded that the officers’ warrantless search of Rooney’s bedroom over his objection was unlawful, and therefore, the evidence of the controlled substances must be suppressed. But Napolitano’s frisk of Rooney’s pants was lawful and based on reasonable suspicion. Therefore, the court reversed Rooney’s three convictions for Unlawful Possession of a Controlled Substance (methamphetamine, heroin, and clonazepam), and affirmed his conviction for First Degree Unlawful Possession of a Firearm.