In Ohio v. Clark, the United States Supreme Court ruled that statements made by the 3-year-old victim to his preschool teacher were properly admitted at trial, despite the fact that the 3-year-old did not testify.

Here, defendant Darius Clark sent his girlfriend away to engage in prostitution while he cared for her 3-year-old son L. P. and 18-month-old daughter A. T. When L. P.’s preschool teachers noticed marks on his body, he identified Clark as his abuser. Clark was subsequently tried on multiple counts related to the abuse of both children. At trial, the State introduced L. P.’s statements to his teachers as evidence of Clark’s guilt, but L. P. did not testify. The trial court denied Clark’s motion to exclude the statements under the Sixth Amendment’s Confrontation Clause. A jury convicted Clark on all but one count. The state appellate court reversed the conviction on Confrontation Clause grounds, and the Supreme Court of Ohio affirmed. The U.S. Supreme Court stepped in to resolve the matter once and for all.

For those who don’t know, The Confrontation Clause of the Sixth Amendment to the United States Constitution provides that “in all criminal prosecutions, the accused shall enjoy the right…to be confronted with the witnesses against him.” Generally, the right is to have a face-to-face confrontation with witnesses who are offering testimonial evidence against the accused in the form of cross-examination during a trial. The Fourteenth Amendment makes the right to confrontation applicable to the states and not just the federal government. The right only applies to criminal prosecutions.

Here, the U.S. Supreme Court reasoned that L. P.’s statements at trial – which were introduced as hearsay evidence through the testimony of a school counselor – did not violate the Confrontation Clause.

In reaching its decision, the Court said it’s prior decision in Crawford v. Washington held that the Confrontation Clause generally prohibits the introduction of “testimonial” statements by a non-testifying witness, unless the witness is “unavailable to testify, and the defendant had had a prior opportunity for cross-examination.” Additionally, a statement qualifies as testimonial if the “primary purpose” of the conversation was to “create an out-of-court substitute for trial testimony.” The Court addressed why L.P.’s statements were not “testimonial:”

“L. P.’s statements were not made with the primary purpose of creating evidence for Clark’s prosecution. They occurred in the context of an ongoing emergency involving suspected child abuse. L. P.’s teachers asked questions aimed at identifying and ending a threat. They did not inform the child that his answers would be used to arrest or punish his abuser. L. P. never hinted that he intended his statements to be used by the police or prosecutors. And the conversation was informal and spontaneous. L. P.’s age further confirms that the statements in question were not testimonial because statements by very young children will rarely, if ever, implicate the Confrontation Clause”

“Finally, although statements to individuals other than law enforcement officers are not categorically outside the Sixth Amendment’s reach, the fact that L. P. was speaking to his teachers is highly relevant. Statements to individuals who are not principally charged with uncovering and prosecuting criminal behavior are significantly less likely to be testimonialthan those given to law enforcement officers.”

Furthermore, the Court found it irrelevant that the teachers’ questions and their duty to report the matter had the natural tendency to result in Clark’s prosecution. “Mandatory reporting obligations do not convert a conversation between a concerned teacher and her student into a law enforcement mission aimed at gathering evidence for prosecution.”

My opinion? I fear a slippery slope. Child victims are notoriously difficult. The first challenge is getting an interview. If defense counsel succeeds, they must be prepared to interview the child victim with a legion of DV advocates, investigating officers, parents, family friends and the Prosecutor attending the interview. And by this time, the matter has been discussed ad nauseum between the child and the aforementioned. Consequently, by the time the interview happens, the child has essentially been trained and coached to memorize a script and stick with it.

Now, with this opinion, it seems that school counselors can testify to statements made by the child victim., and that the child not even be made available to testify. Under the Washington Rules of Evidence – which strictly follow the Federal Rules of Evidence – ER 801 says, “Hearsay” is an out-of-court statement made to prove the truth of the matter asserted. Statements made by another are hearsay. Also, Hearsay is generally inadmissible. But now, under these circumstances, hearsay is admissible; and made worse by the fact that the defendant cannot confront the child witness at trial. This violates the essence of the 6th Amendment’s Confrontation clause. Period. Bad decision. 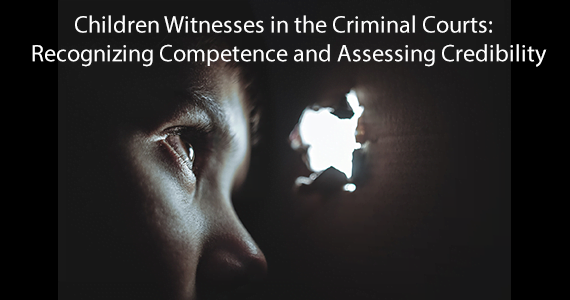 In State v. S.J.W., the WA Supreme Court held that a party challenging the competency of a child witness must show that the child is of unsound mind, intoxicated at the time of his production for examination, incapable of receiving just impressions of the facts, or incapable of relating facts truly.

S.J.W., a minor, was charged with a sex offense against a 14-year-old W.M., a developmentally delayed boy.  The State wanted W.M. to testify against S.J.W., and S.J.W. challenged W.M.’s competency to testify.  At the competency hearing, the trial judge concluded S.J.W. failed to meet his burden to establish that W.M. was not competent to testify.  The trial judge permitted W.M. to testify at the bench trial, and S.J.W. was convicted.

S.J.W. appealed.  The Court of Appeals affirmed S.J.W.’s conviction but held  that the party offering a child witness bears the burden to show the witness is competent to testify.  The Court of Appeals concluded that, although the trial judge erroneously placed that burden on S.J.W., this error was harmless.  The State challenges this holding, arguing that the trial judge properly placed the burden on S.J.W.  The WA Supremes agreed.

The WA Supremes reasoned that until 1986, former RCW 5.60.050 provided that all persons of suitable age could be witnesses except those of unsound mind, those who were intoxicated at the time of examination, and children under 10 who appeared incapable of receiving just impressions of the facts or of relating them truly.  State v. Allen, however, changed the notion.

In other words, all persons, regardless of age, are now subject to this rule because there is no longer any requirement that a witness be of suitable age or any suggestion that children under 10 may not be suitable witnesses.  A child’s competency is now determined by the trial judge within the framework of RCW 5.60.050, while the Allen factors serve to inform the judge’s determination.

My opinion?  I prefer having the 10-year old “cutoff age” when it comes to child testimony.  All to often, children are coached by biased adults.  I’ve conducted enough jury trials to know that children usually repeat whatever the trusted adult wants them to say.  Unfortunately, this court decision places an extra burden on attorneys – defense attorneys, undoubtedly – to show the respective child witness is incompetent to testify.