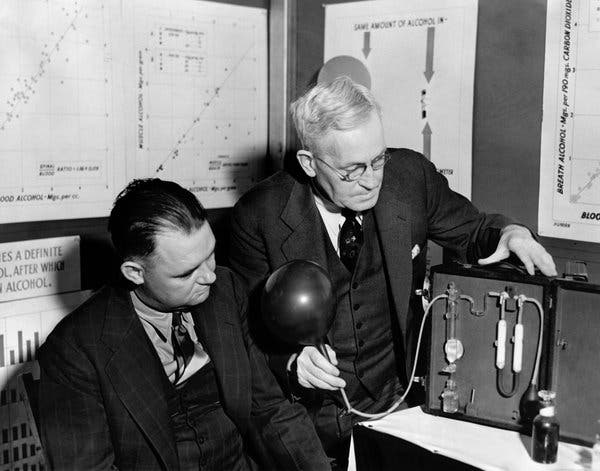 A New York Times investigation found that these devices, found in virtually every police station in America, generate skewed results with alarming frequency, even though they are marketed as precise to the third decimal place.

The Times interviewed more than 100 lawyers, scientists, executives and police officers and reviewed tens of thousands of pages of court records, corporate filings, confidential emails and contracts. Together, they reveal the depth of a nationwide problem that has attracted only sporadic attention.

Judges in Massachusetts and New Jersey have thrown out more than 30,000 breath tests in the past 12 months alone. According to the authors, the invalidated tests in Massachusetts were already used to convict drivers, state records show. This month, the state will begin informing those defendants that they can seek a new trial, and lawyers are bracing for a flood of requests. So are lawyers in New Jersey, where more than 13,000 people were found guilty based on breath tests from machines that hadn’t been properly set up. This was largely because of human errors and lax governmental oversight.

A county judge in Pennsylvania called it “extremely questionable” whether any of his state’s breath tests could withstand serious scrutiny. In response, local prosecutors stopped using them. In Florida, a panel of judges described their state’s instrument as a “magic black box” with “significant and continued anomalies.”

Even some industry veterans say the machines should not be de facto arbiters of guilt. “The tests were never meant to be used that way,” said John Fusco, who ran National Patent Analytical Systems, a maker of breath-testing devices.

Yet the tests have become all but unavoidable. Every state punishes drivers who refuse to take one when ordered by a police officer.

“The consequences of the legal system’s reliance on these tests are far-reaching,” say the authors. “People are wrongfully convicted based on dubious evidence. Hundreds were never notified that their cases were built on faulty tests. And when flaws are discovered, the solution has been to discard the results — letting potentially dangerous drivers off the hook.”

My opinion? The “science” behind DUI investigations is very suspect. Hand-held portable breath tests like Alco-Sensor IV, contain fuel cells that react to the alcohol in exhaled breaths and generate an electric current — the stronger the current, the higher the alcohol level. They are inexpensive and easy to maintain, but their results can be inconsistent. Older women sometimes have trouble producing enough breath to get the machines to work. Toothpaste, mouthwash and breath mints — even hand sanitizer and burping — may throw off the test results.

Please contact my office if you, a friend or family member are charged with DUI charges or any other alcohol-related driving charges. Hiring an effective and competent defense attorney is the first and best step toward justice.