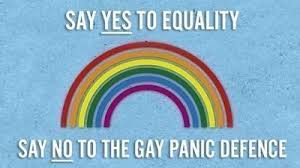 The Associated Press reports that Washington has become the 10th state to prohibit homicide defendants from claiming a defense based on panic over a victim’s sexual orientation or gender identity.
Gov. Jay Inslee signed the measure Thursday. It takes effect in June. Nine other states — California, Connecticut, Hawaii, Illinois, Maine, Nevada, New Jersey, New York and Rhode Island — have already banned the use of gay or transgender panic as a legal defense.
The Washington state measure is named after Nikki Kuhnhausen, a transgender teen who was killed last year, The Columbian reported. It was approved with bipartisan support in the state House and Senate, though some lawmakers questioned if the legislation was necessary since a panic defense has never been used in Washington.

Kuhnhausen, 17, disappeared in early June and her remains were discovered Dec. 7, southeast of Battle Ground. A Vancouver man was charged with second-degree murder and malicious harassment, which is a hate crime in Washington. He has pleaded not guilty. Authorities said the Vancouver teenager was strangled after her assailant learned she was transgender.

The new law blocks a defendant from using a defense based on discovery or disclosure of the victim’s actual or perceived gender identity or sexual orientation and would prevent a claim of Diminished Capacity because the defendant did not fully comprehend the nature and gravity of the alleged crime.

Please contact my office if you, a friend or family member are charged with Malicious Harassment or any other Hate Crimes. Hiring an effective and competent defense attorney is the first and best step toward justice.