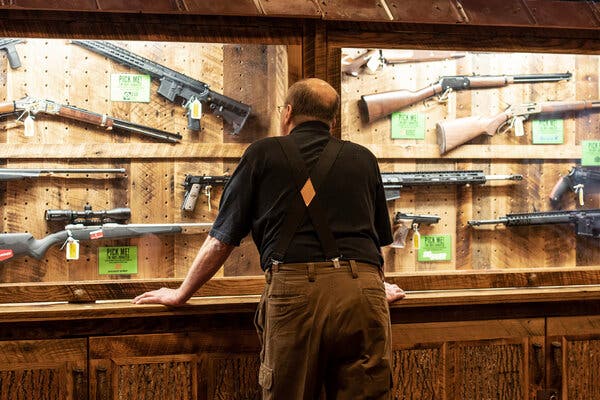 Journalist Amber Philips reports that the U.S Supreme Court could soon drastically expand the right to carry guns. New York State Rifle & Pistol Association v. Bruen will be the court’s first major Second Amendment case in more than a decade. It takes place amid rising national gun violence and an uptick in gun sales in recent years. In short, what the justices decide could unravel laws across the nation restricting who can carry guns in public.

For 108 years, New York State Law law holds that anyone who wants to carry a gun in public must adhere to specific guidelines. They must apply for a license, be at least 21, have no criminal record, and have “good moral character.” This is the part really being challenged — a demonstrated need to carry the gun beyond average public safety fears. This is known as “proper cause.”

Two men from Upstate New York challenged the state’s law when they applied to carry a gun at all times but received allowances only for hunting or going to and from work. They sued, arguing the strict law violated their Second Amendment rights to “keep and bear arms.”

Even though the law has been on the books for so long, it’s at risk of being knocked down now by a newly cemented conservative Supreme Court majority. And depending on how widely the justices rule, they could knock down other state laws like it.

Mostly liberal states such as California, Hawaii, Maryland, Massachusetts, Connecticut and New Jersey have similar public carry restrictions, and so do several big cities. Supporters of these laws argue that they’re necessary in high-density areas and that the Constitution allows states to govern themselves. Supporters also argue that such restrictions have been around for centuries. By itself, this shows the value society has placed on public safety over gun rights in public places.

Critics say requiring people to justify why they need to carry a gun in public puts a burden specifically on the Second Amendment’s right to “bear” arms. Challengers to the law told the Supreme Court that a person should not have to show a “special need” to exercise a constitutional right.

According to journalist Amber Philips, this case has mixed up traditional political lines on guns. Several Republican lawyers filed a brief supporting laws like New York’s, arguing that specifically in the District of Columbia, public carry restrictions “may well have prevented a massacre” at the Capitol on Jan. 6, 2021. Meanwhile, a group of public defenders in New York City argue that the law disproportionately affects the constitutional rights of Black and Latino New Yorkers.

This Case Could Affect Gun Laws Across the Nation

The Supreme Court hasn’t weighed in recently on whether the Second Amendment protects carrying guns outside the home. In 2008’s District of Columbia v. Heller, the court said the Second Amendment protects the right to own a gun for self-defense in the home, and in McDonald v. Chicago in 2010, it made clear that state and local gun control measures (and not just federal ones) also must respect that right.

New York City officials fear that the Supreme Court could force the state to allow more people to carry more guns in public places. Gun violence there has doubled in recent years, from their historic lows in the years before the pandemic.

“In a densely populated community like New York, this ruling could have a major impact on us.” ~New York Mayor Eric Adams

Washington’s firearms laws are codified in chapter 9.41 RCW. Cities, towns, counties, and other municipalities may also have certain laws and ordinances affecting the use, possession or sale of firearms. You can contact your sheriff’s office or police department through the local city or county government to determine if any local laws have been adopted.