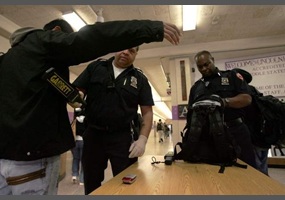 In State v. Brock, the WA Court of Appeals held that police officers cannot search someone’s backpack and arrest them for Drug Offenses 10 minutes after contacting a suspect on a Terry stop.

“NO,” said the Court of Appeals in a recent decision.  the facts were such that during a Terry stop, an officer separated Mr. Brock from his backpack. The officer subsequently arrested Brock and searched his backpack, but not until nearly 10 minutes after separating Brock from the bag. Officer Olson told Brock that he was not under arrest. Officer Olson asked Brock to put down his backpack, and Brock complied.

Officer Olson did not find any weapons or any other items during his pat down of Brock. He did not pat down or search the backpack at that time. At trial, the trial court denied Brock’s motion to suppress, finding that this was a valid search incident to arrest under article I, section 7 of the Washington Constitution. However, the Court of Appeals reversed the decision.

Some explanation is necessary. A “Terry stop” is a brief detention of a person by police on reasonable suspicion of involvement in criminal activity but short of probable cause to arrest. The name derives from a famous United States Supreme Court decision titled, Terry v. Ohio.

Also, under the “time of arrest” rule, an officer may search personal articles in an arrestee’s actual and exclusive possession at or immediately preceding the time of arrest.

Brock had actual possession of the backpack when Officer Olson initiated the Terry stop and when he seized it. However, Brock did not have actual possession of the backpack at the time of his arrest. Brock’s backpack was neither on his person nor within his area of control at the time of his arrest. While Officer Olson had probable cause to arrest Brock when he seized the backpack, it is the arrest itself—not probable cause—that constitutes the necessary authority of law to search under article I, section 7.

Therefore, to find that this was a valid search incident to arrest, the Court said it must be convinced that, for the purposes of what is in an arrestee’s possession, “immediately prior to arrest” includes either the time between a valid Terry stop and the actual resulting arrest or the time between seizure of the backpack during the Terry stop and the resulting arrest. The Court concluded in saying that Washington Supreme Court’s opinions have not gone this far, and “We decline to do so here.”

My opinion? Good decision. It’s pleasing to know our courts are upholding the WA Constitution and following the stringent search and seizure caselaw. Kudos.