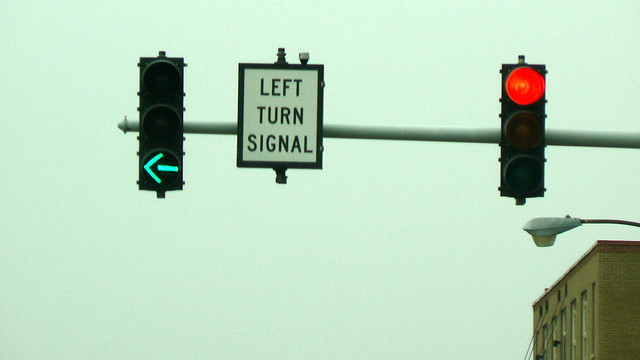 In State v. Brown, the WA Court of Appeals held that a driver, who moved left from a middle lane to a dedicated left turn lane while signaling his intention to change lanes, is not required to reactive his turn signal before turning left from the reserve lane unless public safety is implicated. Therefore, evidence discovered when a driver is stopped for failing to signal a turn when public safety is not implicated must be suppressed.

On the evening of March 22, 2015, Trooper Acheson of the WA State Patrol patrolled the streets of Kennewick. At 10:15 p.m., while traveling eastbound on Clearwater Avenue, Trooper Acheson saw Mr. Brown driving a Toyota Tundra, turn right from Huntington Street onto Clearwater Avenue. During the turn, the left side tires of the Tundra, a large pickup, crossed the white dashed divider line between the two eastbound lanes by one tire width for a brief moment, after which the vehicle fully returned to its lane of travel. Brown’s diversion across the dividing line did not endanger any travel. Acheson observed Brown’s tires cross the white dashed divider line, and he continued to view Brown’s driving thereafter.

Shortly after entering Clearwater Avenue, Mr. Brown signaled his intent to change lanes, and to move to the left or inner eastbound lane, by activating his left turn signal that blinked numerous times. Brown entered the inner lane of the two lanes.

Soon, Mr. Brown approached the intersection of Clearwater Avenue and Highway 395, where the eastbound lanes widen to three lanes. The innermost of the three lanes becomes a designated left turn only lane. Brown again wished to change lanes so he could turn left. Brown signaled his intent to move left into the dedicated turn lane. Brown maneuvered his vehicle into the dedicated turn lane, at which point the left turn signal cycled-off.

Mr. Brown stopped his vehicle in the dedicated left turn lane while awaiting the light to turn green. He did not reactivate his turn signal. Trooper Acheson pulled behind Brown. No other traffic was present on eastbound Clearwater Avenue. When the light turned green, Brown turned left onto northbound Highway 395. Trooper Mason Acheson then activated his patrol vehicle’s emergency light and stopped Brown.

Trooper Acheson stopped David Brown based on Brown’s crossing the eastbound lanes’ divider line during his turn from Huntington Street onto Clearwater Avenue. He did not stop Brown based on Brown’s failure to signal his left turn onto Highway 395. After stopping Brown, Trooper Acheson investigated Brown for suspicion of driving under the influence of intoxicants (DUI). Acheson arrested Brown for DUI.

The Court of Appeals reasoned that RCW 46.61.305(2) declares that a driver must, “when required,” continuously signal an intention to turn or cross lanes during at least the last one hundred feet traveled before turning or moving lanes. This appeal asks if this statute compels a driver, who moved left from a middle lane to a dedicated left turn lane while signally his intention to change lanes, to reactivate his turn signal before turning left from the reserved turn lane.

With that, the Court of Appeals reversed the superior court, reinstated the district court’s grant of David Brown’s motion to suppress and dismissed the charge of driving while under the influence.

My opinion? Good decision. It makes sense that unless public safety is an issue, police officers shouldn’t have probable cause or reasonable suspicion to pull over a vehicle that’s clearly in the left-turn lane even though their vehicle turn signal is not activated.

Please contact my office if you, a friend or family member face criminal charges of DUI, Reckless Driving, Driving While License Suspended or other criminal traffic violations.