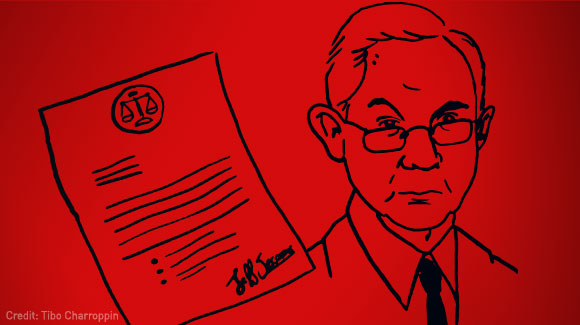 Today, CNN Reporter Laura Jarrett broke the story that Attorney General Jeff Sessions has a new directive for federal prosecutors across the country: charge suspects with the most serious offense you can prove.

Friday’s announcement follows a line of several other significant departures from Obama-era domestic policies at the Justice Department, but this decision crystalized Sessions’ position in the criminal justice realm.
In a brief one-and-a-half-page memo, Sessions outlined his new instructions for charging decisions in federal cases, saying that his new first principle is “that prosecutors should charge and pursue the most serious, readily provable offense.”
“The most serious offenses are those that carry the most substantial guidelines sentence, including mandatory minimum sentences,” Sessions later adds.
While the federal sentencing guidelines are advisory — and take into account everything from a defendant’s criminal history to cooperation with authorities — some judges have felt handcuffed by mandatory minimums, which provide a statutory sentencing minimum of months below which the judge cannot depart.
The move was harshly criticized by the New York University School of Law Brennan Center for Justice, a nonpartisan law and policy institute focused on democracy and justice.
“The Trump administration is returning to archaic and deeply-flawed policies,” Inimai Chettiar, the center’s justice program director, said Friday. “Sessions is leaving little to no room for prosecutors to use their judgment and determine what criminal charges best fit the crime.”
“That approach is what led to this mess of mass incarceration,” she added. “It exploded the prison population, didn’t help public safety, and cost taxpayers billions in enforcement and incarceration costs.”
Sessions also formally withdrew a signature part of Attorney General Eric Holder’s “Smart on Crime” initiative, which sought to target the most serious crimes and reduce the number of defendants charged with non-violent drug offenses that would otherwise trigger mandatory minimum sentences.
“We must ensure that our most severe mandatory minimum penalties are reserved for serious, high-level, or violent drug traffickers,” Holder wrote in a 2013 memo. “In some cases, mandatory minimum and recidivist enhancements statutes have resulted in unduly harsh sentences and perceived or actual disparities that do not reflect our Principles of Federal Prosecution.”
As a result, during the Obama era, federal prosecutors were instructed not to charge someone for a drug crime that would trigger a mandatory minimum sentence if certain specific factors were met: (a) the relevant conduct didn’t involve death, violence, a threat of violence or possession of a weapon; (b) the defendant wasn’t an organizer, leader or manager of others within a criminal organization; (c) there were no ties to large-scale drug trafficking operations; and (d) the defendant didn’t have a “significant” criminal history (i.e., prior convictions).
All of those charging factors are now gone under Sessions’ reign and not surprising, as he has previously telegraphed his desire to prosecute more federal cases generally.
My opinion? We’re bringing back the War on Drugs. As it stands, the federal government typically prosecutes only the most serious offenses, and does so with what can seem to be a crushing investigation and avalanche of evidence. Their resources are vast. Mounting a defense can feel daunting.
Here, the effects of Session’s decision will most immediately be felt in the context of drug crimes. Federal mandatory minimums can be harsh because the sentences are dictated based on drug type and quantity.
Said differently, Sessions decision could bring back the War on Drugs. His actions are already embracing it’s worst features: confidential informants, harsh plea bargains and long sentences.