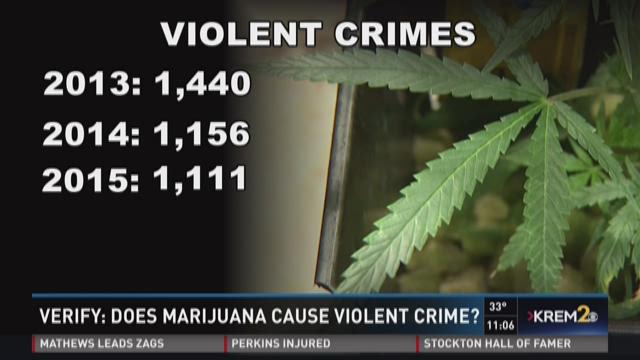 An article in the Bellingham Herald from reporter Melissa Santos says that an upcoming report from a U.S. Department of Justice task force is expected to link marijuana use to violent crime, which some fear might signal the start of a Trump administration crackdown on weed.

According to Santos, U.S. Attorney General Jeff Sessions links marijuana use to violent crime in recent months, fueling some advocates’ concerns about what might come out of next week’s report from the Task Force on Crime Reduction and Public Safety.

“Experts are telling me there’s more violence around marijuana than one would think and there’s big money involved,” Sessions said.

In April, Sessions promised the task force would “undertake a review of existing policies in the areas of charging, sentencing and marijuana to ensure consistency with the department’s overall strategy on reducing violent crime.”

That was after Sessions told reporters in February that the nation was seeing “real violence” around the “unhealthy practice” of marijuana use, according to POLITICO.

According to Santos, however, Mr. Sessions’ statements run contrary to the experience in Washington state, which became one of the first two U.S. states to legalize recreational marijuana use for adults in 2012.

Since voters approved Initiative 502, FBI crime statistics show lower rates of violent crime in Washington than before legalization. According to the FBI data, in 2011 there were 295.6 violent offenses reported per 100,000 Washington residents. In 2015, the most recent full year of data available, that rate had fallen to 284.4 violent offenses per 100,000 people.

Other data compiled by the Washington Association of Sheriffs and Police Chiefs showed some fluctuations in violent crime rates but still found no statistically significant increase. According to those reports, in 2012 there were 3.6 violent offenses per 1,000 state residents. In 2016, the state’s violent crime rate was 3.3 offenses per 1,000 people.

Santos writes that the downturn in violent crime in Washington is consistent with national trends. A Pew Research Center analysis of the FBI data found that nationwide, the rate of reported violent crimes in 2015 was roughly half what it was in 1993.

Still, Washington’s violent crime rate in 2015 was substantially lower than the national rate, according to the FBI data.

Neither the FBI data nor the data from the Washington Association of Sheriffs and Police Chiefs specifically tracks violent crime that might be related to marijuana. A spokeswoman for the Tacoma Police Department said her agency doesn’t track offenses that way, either.

“In Washington state, I think it would be a strain to correlate violent crime with marijuana usage,” said Mitch Barker, the executive director of the sheriff and police chiefs group. “I would struggle to believe that the legalization of marijuana or more legalization relates to violent crime — somebody would have to make that case to me.”

State Rep. David Sawyer, D-Tacoma and the chairman of the House committee that deals with marijuana, said some state officials initially expected crime to go up with marijuana legalization, especially since the state’s weed stores run entirely on cash.

“As far as I’m aware there is no credible study linking violent crime and marijuana,” he said. “I think what more people are realizing is violent crime is linked to keeping marijuana illegal . . . In general, legalization takes money out of the hands of criminals,” he said, referring to drug cartels.

State Sen. Ann Rivers, R-La Center and the Senate GOP’s leader on marijuana policy, agreed. She noted Washington is expecting to rake in about $730 million in tax revenue from marijuana sales in the next two years — and not all of that is from people who just discovered the drug.

Yet in May, Sessions asked Congress to lift a restriction that prevents the Justice Department from using federal money to interfere with states that have legalized medical marijuana. Sessions called the restriction on federal prosecutions “unwise… particularly in the midst of an historic drug epidemic and potentially long-term uptick in violent crime,” according to reports by Massroots.com and The Washington Post.

Sawyer said he remains concerned that Washington’s system could be at risk.

“I think it’s a very real possibility,” Sawyer said. “But we’re going to see what the administration chooses to do.”

The Federal Bureau of Investigation reports violent crime rate in Washington has declined since voters here legalized recreational marijuana use in November 2012. The FBI numbers are based on crimes reported to law enforcement agencies.