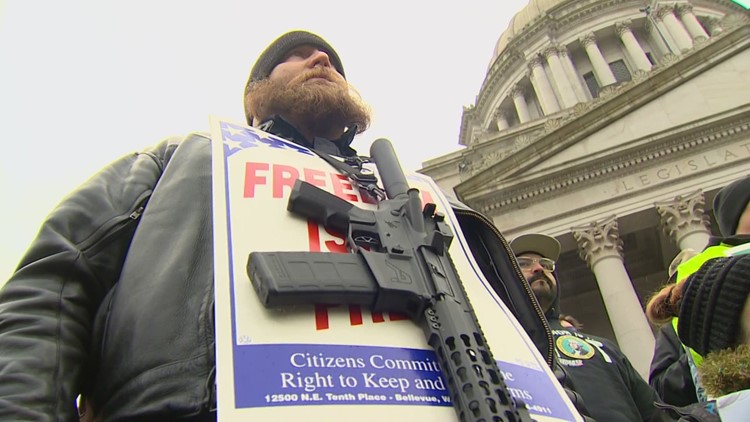 Among those in attendance at the ceremony were Attorney General Bob Ferguson, Democratic state legislators and individuals who’ve been affected by gun violence. The Attorney General’s office also points to studies that have concluded that gun magazine limits reduce the incidence of mass shootings and save lives.

WHAT HAPPENS IF I CURRENTLY OWN A “HIGH-CAPACITY” MAGAZINE?

IS ANYONE EXEMPT FROM THE NEW LAWS?

Yes. Licensed firearms dealers can still sell high-capacity magazines to all branches of the military and to law enforcement agencies. Exemptions for who can carry weapons at certain facilities include federal, state and local law enforcement officials.

WHEN DO THESE LAWS GO INTO EFFECT?

The “manufacturing, causing to be manufactured, assembling, causing to be assembled, selling, offering to sell, transferring, or purchasing” of untraceable firearms will be prohibited after June 30. Restrictions on guns at school board meetings, local government meetings and election facilities goes into effect 90 days after the adjournment of the session, or June 8.

WHAT ARE THE PENALTIES FOR BREAKING THE NEW LAWS?

My opinion? A constitutional challenge to the gun magazine law is likely. On Wednesday, the Nevada-based Firearms Policy Coalition announced it’s seeking plaintiffs to lead a lawsuit against the new law. Ferguson, however, expressed confidence the courts will uphold the law. Last November, a panel of judges from the 9th U.S. Circuit Court of Appeals upheld a similar ban enacted by California.

Please contact my office if you, a friend or family member are charged with Firearm Offenses or any other crimes. Hiring an effective and competent defense attorney is the first and best step toward justice.