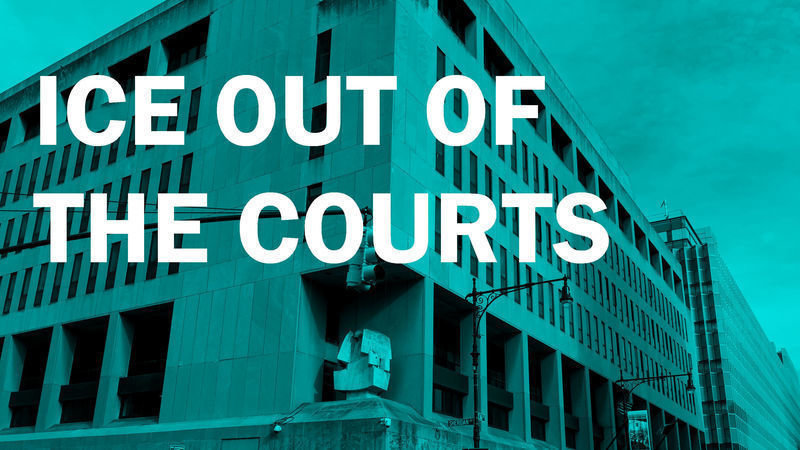 Excellent article in Crosscut by  Lilly Fowler describes how the Washington state Legislature is considering a bill that would prohibit federal immigration agents without a warrant from making arrests within one mile of a courthouse.

If signed, the legislation – SB 6522 – would also require judicial warrants to be reviewed by a court before being used. And federal immigration agents would have to check in with local court staff before entering a courthouse. A website monitored by the state Administrative Office of the Courts would track all arrests made at courthouses.

Finally, the bill would prohibit court staff, including prosecutors, from sharing information with federal immigration officials. A recent report from the University of Washington Center for Human Rights revealed that county prosecutors have been sharing information with U.S. Immigration and Customs Enforcement (ICE) and Border Patrol agents to facilitate the arrests of undocumented immigrants at state and local courthouses.

As reported by Ms. Fowler, the outcry over immigrants being arrested at courthouses by plainclothes ICE and Border Patrol officials has been persistent. Washington state Attorney General Bob Ferguson sued the federal government last month in an attempt to stop such arrests, and the state Supreme Court is looking at rules that would bar the apprehensions.

At a hearing on the bill last week before the House Civil Rights and Judiciary Committee, legislators heard testimony in Spanish from a man named Carlos. He told lawmakers he and his wife recently visited the courthouse in Ephrata, Grant County, to renew his car’s license plates. While his wife waited in the vehicle, Carlos stood in line inside the courthouse and noticed a man staring at him.

As Carlos exited the courthouse, another man with a gun approached him, introduced himself as a federal immigration official and, in Spanish, said, “Soy la migra” (or “I am ICE/Border Patrol”). Carlos was promptly arrested. Although he was eventually released by the ICE agent, the experience left him shaken and terrified.

Enoka Herat, an attorney with the American Civil Liberties Union of Washington, said the state would not be the first to protect its court system. In November, the Oregon Supreme Court barred warrantless arrests at courthouses. California, New York and New Jersey have also sought similar protections for immigrants. In Massachusetts, a federal judge barred courthouse arrests while a lawsuit makes its way through the court system.

Let’s hope SB 6522 gains support and passes. The bill  isn’t about hampering the work of law enforcement. It’s about but ensuring the public can use courts to pay fines, serve as witnesses, seek protection orders and pursue other matters related to the justice system, without the fear of unexpected encounters with law enforcement.  Equal access to courts is something both Democrats and Republicans should be able to agree upon.