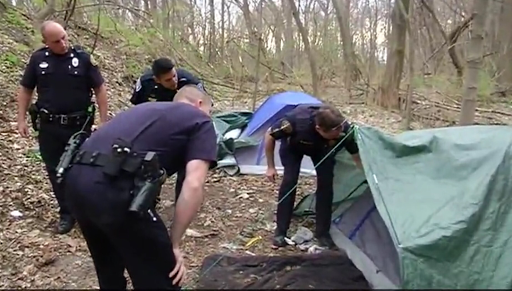 In State v. Pippin, the WA Court of Appeals held that a person has a constitutional privacy interest in a tent that is unlawfully erected on public property.

Mr. Pippin was a homeless man, living in a tent-like structure on public land in Vancouver. As part of an attempt to notify individuals of a new camping ordinance which prohibits camping on public land without permission, police officers approached Pippin’s tent and requested that he come out. Because Pippin did not come out after an uncertain amount of time and because of noises they heard in the tent, the officers felt they were in danger. One officer lifted a flap of Pippin’s tent to look inside. In the tent, the officers observed a bag of methamphetamine. Pippin was charged with unlawful possession of a controlled substance.

He moved to suppress the evidence derived from the officer basically lifting the flap and looking into the tent, arguing that it was an unconstitutional search under the Fourth and Fourteenth Amendments of the United States Constitution and article I, section 7 of the Washington Constitution. The Court granted his motion and dismissed  the charge.

The State appealed on arguments that (1) the trial court erred in determining that Pippin had a privacy interest in his tent under the Fourth Amendment to the United States Constitution and article I, section 7 of the Washington Constitution, and (2) if Pippin’s tent is entitled to constitutional privacy protection, the trial court erred in concluding that the officers’ act of opening and looking into the tent was not justified as a protective sweep or through exigent circumstances based on officer safety.

In the published portion of this opinion, the Court of Appeals held that Pippin’s tent and its contents were entitled to constitutional privacy protection under article I, section 7 of the WA Constitution.

The Court reasoned that Article I, section 7 of the WA Constitution mandates that “no person shall be disturbed in his private affairs, or his home invaded, without authority of law.” It then analyzed different cases under the WA Supreme Court. In short, prior opinions have held that the State unreasonably intruded into a person’s private affairs when it obtained long distance telephone toll records through a pen register, examined the contents of a defendant’s trash placed on the curb for pickup, randomly checked hotel registries to determine who were guests at a hotel, attached a global positioning system tracking device to a defendant’s vehicle, and read through text messages on a cell phone.

The Court’s analysis focused on (1) the historical protections afforded to the privacy interest, (2) the nature of information potentially revealed from the intrusion, and (3) the implications of recognizing or not recognizing the asserted privacy interest.

“Pippin’s tent allowed him one of the most fundamental activities which most individuals enjoy in private—sleeping under the comfort of a roof and enclosure. The tent also gave him a modicum of separation and refuge from the eyes of the world: a shred of space to exercise autonomy over the personal. These artifacts of the personal could be the same as with any of us, whether in physical or electronic form: reading material, personal letters, signs of political or religious belief, photographs, sexual material, and hints of hopes, fears, and desire. These speak to one’s most personal and intimate matters.”

The Court further reasoned that the temporary nature of Pippin’s tent does not undermine any privacy interest, nor does the flimsy and vulnerable nature of an improvised structure leave it less worthy of privacy protections. “For the homeless, those may often be the only refuge for the private in the world as it is,” said the Court.

Under the case law above, Pippin’s tent was the sort of closed-off space that typically shelters the intimate and discrete details of personal life protected by article I, section 7.

The court concluded by saying that all three examined factors—the historical protections, the intimate details revealed from a search, and the implications of recognizing the interest—weigh in favor of finding that Pippin’s tent functioned as part of his private affairs worthy of protection from unreasonable intrusions.

“Accordingly, we hold that Pippin’s tent and its contents fell among those “privacy interests which citizens of this state . . . should be entitled to hold, safe from governmental trespass absent a warrant. As such, Pippin’s tent and contents are protected under article I, section 7 of the Washington Constitution.”

In the unpublished portion of the opinion, the Court held that because the State failed to show that an arrest was taking place, the protective sweep exception does not apply.

My opinion? Excellent decision. The homeless have rights, too. Just because one lives in a tent without a front door to knock on, doesn’t mean that police can intrude on one’s public affairs. There was no “exigent circumstance” or “officer safety issue” justifying the intrusion. Good opinion.