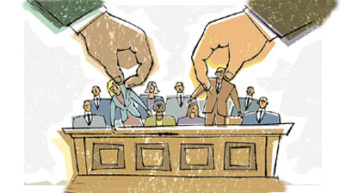 In Berghuis v. Smith, the U.S. Supreme Court held that a Michigan state court did not create an unfair bias in jury selection for a murder trial. case.

The defendant was an African-American man charged with Second Degree Murder and Felony Firearm Possession.  He goes to trial.  At voir dire, the jury panel was composed of 60 and 100 individuals, only 3 of whom, at most, were African American.  At that time, African-Americans constituted 7.28% of the County’s jury-eligible population, and 6% of the pool from which potential jurors were drawn.  An all-white jury was selected.  The trial court rejected Smith’s objection to the panel’s racial composition.  The all-white jury convicted Smith of the crimes.  He was sentenced to life in prison.

For those who don’t know, the 6th Amendment gives criminal defendants the right to be tried by an impartial jury drawn from sources reflecting a fair cross section of the community.  The issue was whether, under the circumstances, the defendant’s right was violated by the all-white jury’s conviction.

The Court reasoned that a defendant raising a violation of the “fair-cross-section” requirement of the Sixth Amendment must establish that any existing underrepresentation was due to “systematic exclusion” of the group in the jury-selection process. Practices, such as excusing people who merely alleged hardship or simply failed to show up for jury service, reliance on mail notices, a failure to follow up on nonresponses, the use of old addresses, and the refusal of police to enforce court orders for the appearance of prospective jurors, are insufficient to establish “systematic exclusion.”  Consequently, the U.S. Supremes upheld Smith’s conviction.

My opinion?  Pollyannaish as it sounds, this opinion shows why it’s SO IMPORTANT for citizens to show up for jury duty.  Juries are the last bastion of objective, impartial justice.  We all experience moments when we are wrongfully accused; not because we intentionally did something wrong, but merely because we look/think/act outside the norms of the majority.

That’s exactly why juries MUST reflect a fair cross section of the community.  That “cross section,’ however, can only happen if YOU – the citizen – do your part and answer the call to serve on a jury.  Your lone perspective adds depth.  Your life experience – which, amazingly, might be similar to the defendant’s/petitioner’s/plaintiff’s – adds insight to their arguments.