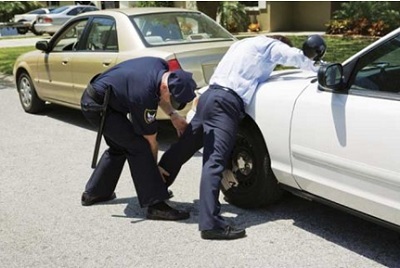 In State v. Flores, Division III of the WA Court of Appeals UPHELD the suppression of a gun that officers found on an individual who was walking with a known-gang member and fugitive who had just threatened another person with a firearm. The reason for the suppression? There were no grounds to frisk the defendant because he made no furtive movements, had no known violent propensities, and was compliant with all of the officer’s directions.

Here, Moses Lake police were responded to an anonymous report that Giovanni Powell held a gun to somebody’s head. Dispatch also reported an outstanding warrant for the arrest of Powell. He was a known gang member and a fugitive.

The defendant, Cody Flores, was with Powell. Although Flores had no warrants for his arrest and did not point a firearm at anyone, Flores did, in fact, possess a firearm on his person. Unfortunately, he possessed the firearm unlawfully because a prior felony conviction barred his possession.

Police apprehended both Powell and Flores. Although Flores complied with officers, had no known violent propensities and was compliant with all of the officer’s directions, Flores was nevertheless frisked. Officers found his firearm. He was charged with Unlawful Possession of a Firearm in the First Degree in violation of RCW 9.41.040(1)(a). However, Flores’ his defense attorney prevailed in a 3.6 Motion to suppress the firearm due to an unlawful search.

Among other findings, the trial court found that the officers lacked individualized articulable suspicion to suspect Cody Flores of criminal activity. The trial court granted Cody Flores’ motion to suppress evidence of the gun found on his person and dismissed the charge against him. The State filed an appeal.

The WA Court of Appeals sided with the trial court’s suppression. It reasoned that the Washington Constitution, not the Fourth Amendment to the United States Constitution, is the controlling law. Article I, section 7 of the WA Constitution provides that “No person shall be disturbed in his private affairs, or his home invaded, without authority of law.” The Court reasoned that WA’s protection encompasses and exceeds the protection guaranteed in the Fourth Amendment of the United States Constitution.

The Court further reasoned that, as a general rule, warrantless searches and seizures are per se unreasonable, in violation of the Fourth Amendment and article I, section 7 of the Washington State Constitution. There are five exceptions to the warrant requirement. They include (1) exigent circumstances, (2) searches incident to a valid arrest, (3) inventory searches, (4) plain view searches, and (5) Terry investigative stops. The State bears the burden of demonstrating that a warrantless seizure falls into a narrow exception to the rule. “This is a strict rule.” said the Court. “Exceptions to the warrant requirement are limited and narrowly drawn.

“Merely associating with a person suspected of criminal activity does not strip away the protections of the constitution,” said the Court. “In order for police to lawfully seize an otherwise innocent individual present with an arrestee, the arresting officer must articulate an ‘objective rationale’ predicated specifically on safety concerns.”

With that, the Court of Appeals affirmed the trial court’s suppression of evidence and dismissal of charges against Cody Flores.

My opinion? This is a well-reasoned case. It’d be different if the defendant was doing something unlawful, being uncooperative and/or raising safety concerns with the police. Here, the situation was purely mathematics. Again, there can search incident to arrest if there is no arrest. And there can be no arrest without probable cause. Here, there was no probable cause to arrest and search Mr. Flores. Period.