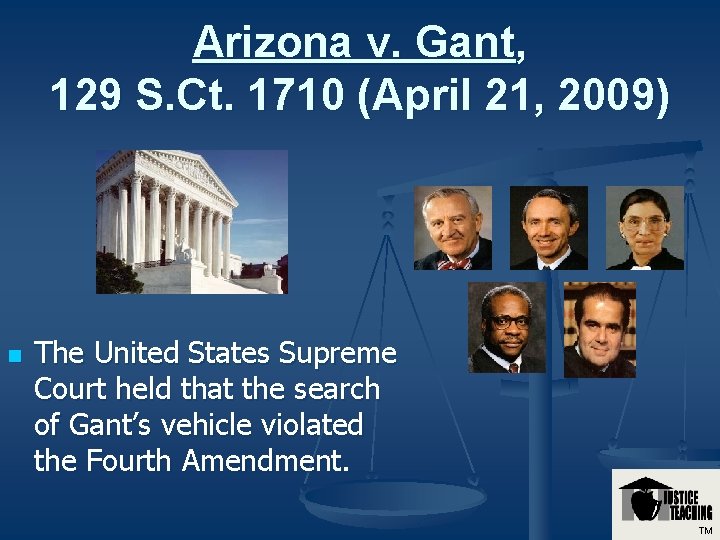 In State v. Harris, the  WA Court of Appeals held that a defendant who did not bring a suppression motion prior to trial, may assert a claim under Arizona v. Gant  for the first time on appeal.

Defendant Stuart J. Harris, Jr. appealed his conviction for First Degree Unlawful Possession of a Firearm.  He argued  sufficiency of the evidence,  additional evidentiary error, and prosecutorial misconduct.   While this appeal was pending, the United States Supreme Court decided Arizona v. Gant, which deals with the scope of a car search pursuant to the arrest of its driver.  The Court of Appeals Division II allowed the parties to provide supplemental briefs on the Gant issue.

For those who don’t know, Gant rejected the reading of New York v. Belton, 453 U.S. 454, 101 S. Ct. 2860, 69 L. Ed. 2d (1981), that predominated in the lower courts, namely, that the Fourth Amendment allows a vehicle search incident to the arrest of a recent occupant even if there is no possibility the arrestee could gain access to the vehicle at the time of the search.

In departing from Belton, the Gant Court held instead that police may search a vehicle incident to a recent occupant’s arrest only if the arrestee is within reaching distance of the passenger compartment at the time of the search or it is reasonable to believe the vehicle contains evidence of the offense of arrest.  Gant, 129 S. Ct. at 1723.3

Here, the Court of Appeals reasoned the facts in Gant were similar to those here.  Harris was not within reaching distance of the passenger compartment of the car at the time of its search, and there was no reason to believe that the car contained evidence related to the offense for which he was arrested (driving with a suspended license). Therefore, absent other legal support for the search, the officer’s search of  the car was unlawful.

Furthermore, Gant applies retroactively because “A party should be allowed to take advantage of a decision rendered during the pendency of his case, even if he had not reserved the point decided, if the decision could not have reasonably been anticipated.”  State v. Harris at 6-7, quoting Judge Posner of the Seventh Circuit.

My opinion?  I’m a HUGE fan of the Arizona v. Gant opinion (please see my Dec. 24, 2009 blog), and by extension, I’m a HUGE fan of this opinion. Generally, United States Supreme Court decisions that announce new constitutional rules governing criminal prosecutions apply retroactively to all criminal cases not yet final on appeal.  I’m happy the Court of Appeals stuck to the law; and supported Gant, to boot.