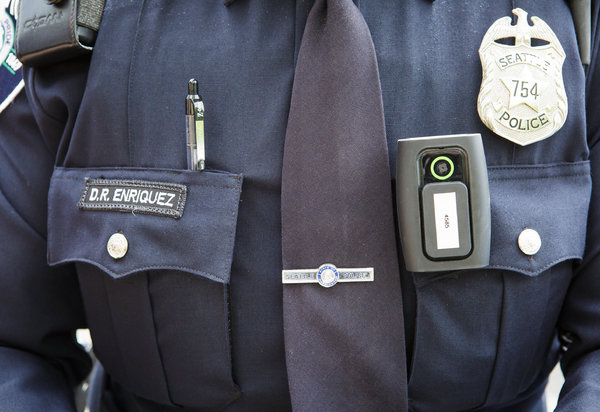 A recent article from the New York Times titled, Downside of Police Body Cameras: Your Arrest Hits Youtube has reignited the discussion of whether police body cameras are worth the trouble.

Recently, law enforcement agencies from around the country have been moving with unusual speed to equip officers with body cameras to film their encounters with the public. But the adoption of these cameras has created a new conflict over who has the right to view the recordings.

In Seattle, where some officers started wearing body cameras, the department has set up its own YouTube channel, broadcasting a stream of blurred images to protect the privacy of people filmed. Much of this footage is uncontroversial; one scene shows a woman jogging past a group of people and an officer watching her, then having a muted conversation with people whose faces have been obscured.

Interestingly enough, very intense public discussion of the issue is happening here in Washington State. Under RCW 42.56, which is Washington State’s Public Disclosure Law, anyone may file a public records request to obtain body camera recordings.

In Bremerton, Chief Strachan tested body cameras last fall before deciding NOT to purchase them. He said the demands the department had received for video during the testing period had been too burdensome.

“We got a request for any and all video shot by a police officer,” he said. “It’s pretty much impossible.”

In nearby King County, Sheriff John Urquhart said he would not equip his deputies with cameras until lawmakers reworked disclosure rules.

“I’d do it in a heartbeat,” he said, “but if the public wants body cameras, they’re going to have to give something up on public disclosure.”

My opinion? Some of the concerns mentioned above appear warranted, however, others do not. True, it’s concerning for a DV victim’s likeness and images to appear on YouTube. It might even violate their privacy. RCW 42.56.050 states, “A person’s ‘right to privacy,’ ‘right of privacy,’ ‘privacy,’ or ‘personal privacy,’ as these terms are used in this chapter, is invaded or violated only if disclosure of information about the person: (1) would be highly offensive to a reasonable person, and (2) is not of legitimate concern to the public.”

Under this, body camera evidence which violates people’s privacy rights might form the basis to support a civil lawsuit against police agencies which readily release that information without redacting people’s likeness and images. Indeed, under RCW 42.56.240, that information is exempt from Public Disclosure. In addressing this problem, it’s comforting that the Seattle The department broadcasts its footage on its own YouTube channel with people’s faces obscured and conversations muted to protect the privacy of people being filmed.

However, I disagree with the Bremerton police chief’s decision to refuse a body camera program altogether because it costs his agency too much money/resources to properly grant people’s public disclosure requests. Under RCW 42.56.120, a reasonable charge may be imposed for providing copies of public records. That makes sense. Police agencies should charge fees when they use their resources to inspect and copy requested material.

Here, the key is what a “reasonable” fee implies. Although law enforcement agencies should charge comparable costs to the consumer for using their resources to inspecting and copy requested materials, the charges should not be overly expensive. For example, in Florida, the Sarasota Police Department has temporarily halted its body camera program after an ACLU Florida lawyer sued over the costs of obtaining footage. The city said it would charge $18,000 for 84 hours of video to be placed on DVDs — about $214 per hour of video.

Police body cameras are an excellent idea. They put everyone on their best behavior. Let’s work through the bugs and restrain ourselves from throwing the baby out with the bathwater.