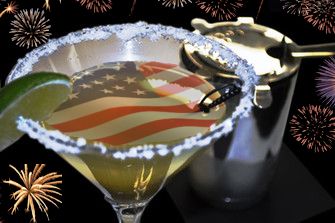 Excellent news article by reporter German Lopez of Vox discusses how the Fourth of July is among the deadliest days for drunk driving every year, thanks to people both drinking and driving more.

According to an analysis by the Insurance Institute for Highway Safety using data from the Fatality Analysis Reporting System, between 2010 and 2014, July 4 had the second highest percent of car crash deaths that were linked to alcohol, and July 3 was also in the top 10.

Lopez gives a scale on how the 10 deadliest days broke down, with the percentage noting how many of the car crash deaths involved a blood alcohol level of 0.08 g/dL or more:

Also, Lopez reported that although drunk driving deaths have plummeted over the past few decades. In 1981, drunk driving killed more than 21,000 people. By 2015, that figure was cut in half. An array of reforms played a big role in that reduction, including raising the legal alcohol age to 21, pushing police to take the enforcement of drunk driving laws much more seriously, and general improvements in car and traffic safety.

But much of that action happened in the 1980s and ’90s, when MADD and other advocacy groups came together in a strong, well-funded effort to take drunk driving more seriously. Since then, the issue has fallen off the national radar.

Alcohol’s problems extend far beyond drunk driving as well. Alcohol is linked to at least 88,000 deaths in the US each year, only about an eighth of which are driving-related. That estimate comes from 2006 through 2010, but more recent data suggests that at least some alcohol deaths are trending up: Between 2010 and 2015, the number of alcohol-induced deaths (those that involve direct health complications from alcohol, like liver cirrhosis) rose from less than 26,000 to more than 33,000.

Based on the research, there is also a lot more that America could be doing to prevent alcohol-related deaths — yet there is little media or public attention to this issue, so there is little pressure for lawmakers to put this research into action. The result is that one of the big causes of death in America continues to kill thousands of people a year.

Lopez points out that when Americans think about alcohol policy, the first thing that comes to mind is probably Prohibition, which effectively banned the manufacture and sale of alcohol from 1920 to 1933. That solution, of course, did not work. Still, Lopez suggests the following other policies could help address the negative safety impacts of drinking.

These are just a few of the ideas that experts have put out there. There are many more ways to curtail alcohol consumption and misuse without outright banning it.

Maybe these policies still go too far for some people. Different individuals will likely disagree on whether these proposals go too far in restricting personal liberty, even if they do save some lives. But the research suggests such policies are at least worth considering.

Yet lawmakers have paid very little attention to alcohol policy. As Philip Cook, a public policy expert at Duke University who wrote Paying the Tab: The Costs and Benefits of Alcohol Control, told Mr. Lopez, the last time Congress raised the federal alcohol tax was 1991 — and that has let the actual impact of the tax erode due to increasing inflation:

“The great opportunity we have is to restore taxes to the real value that they had a few decades ago. That’s justified by the current social costs of drinking, and would have all kinds of beneficial effects, while being justified just from the point of view that drinkers should pay for the damage that they do.”

My opinion? I share Mr. Lopez’s argument that part of the problem is that policymakers just don’t feel much pressure to act on these kinds of public health problems — at least in the same way they feel compelled to act on an issue like, say, terrorism. So thousands of needless deaths continue happening in America every year, including hundreds this Fourth of July.

However, if you; a friend or family member is pulled over for alcohol-related driving, contact a qualified, competent criminal defense attorney as soon as possible. The consequences of DUI – ranging from jail, to high court fines to suspended/revoked drivers  licenses are too great to be trifled with.