An article by Rebecca Smithers of the Guardian reports that scientists at the University of Cambridge have found that the capacity of wine glasses has ballooned nearly seven-fold over the past 300 years, rising most sharply in the last two decades in line with a surge in wine consumption.

Wine glasses have swelled in size from an average capacity of 66ml in the early 1700s to 449ml today, the study reveals – a change that may have encouraged us to drink far more than is healthy. Indeed, a typical wine glass 300 years ago would only have held about a half of today’s smallest “official” measure of 125ml. 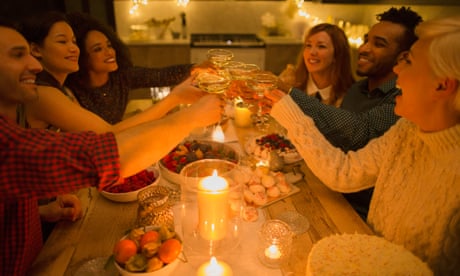 The evidence was clear: the newer glasses were bigger.

The study, published on Wednesday in the BMJ, measured wine glass capacity from 1700 to the present day to help understand whether any changes in their size might have contributed to the rise in wine consumption.

“Wine will no doubt be a feature of some merry Christmas nights, but when it comes to how much we drink, wine glass size probably does matter,” said Prof Theresa Marteau, director of the Behaviour and Health Research Unit at the University of Cambridge, who led the research.

In 2016, Marteau and her colleagues carried out an experiment at the Pint Shop in Cambridge, altering the size of wine glasses while keeping the serving sizes the same. They found this led to an almost 10% increase in sales.

Smithers reports that for the new study, the researchers obtained measurements of 411 glasses from 1700 to the modern day. They found wine glass capacity increased from 66ml in the 1700s to 417ml in the 2000s, with the mean wine glass size in 2016-17 even higher at 449ml.

“Wine glasses became a common receptacle from which wine was drunk around 1700,” says author Dr. Zorana Zupan. “This followed the development of lead crystal glassware by George Ravenscroft in the late 17th century, which led to the manufacture of less fragile and larger glasses than was previously possible.”

The study points out that alcohol is the fifth largest risk factor for premature mortality and disability in high income countries. In England, the type of alcohol and volume consumed has fluctuated over the last 300 years, in response to economic, legislative and social factors. Significantly, wine consumption increased almost fourfold between 1960 and 1980, and almost doubled again between 1980 and 2004, a trend attributed to better marketing and licensing liberalisation which allowed supermarkets to compete in the lucrative drinks retail business.

“Our findings suggest that the capacity of wine glasses in England increased significantly over the past 300 years,” added Zupan.

“Since the 1990s, the size has increased rapidly. Whether this led to the rise in wine consumption in England, we can’t say for certain, but a wine glass 300 years ago would only have held about a half of today’s small measure.”

The strength of wine sold in the UK has also increased since the 1990s, adding to the amount of pure alcohol being consumed by wine drinkers.

In England, wine is increasingly served in pubs and bars in 250ml servings, with smaller measures of 125ml often absent from wine lists or menus despite a regulatory requirement that licensees make customers aware of them.

The Wine and Spirits Trade Association said sociological trends were probably part of the reason for the growing wine glasses.

“The size of a wine glass reflects the trend and fashions of the time and is often larger for practical reasons” said the WSTA chief executive Miles Beale. “Red wine, for example, is served in a larger glass to allow it to breathe, something which perhaps wasn’t a priority 300 years ago.”

Drink responsibly. If, however, your family or friends are charged with DUI or face any other alcohol-related charges, then contact my office and schedule a free consultation. You need effective and competent representation before the judge, prosecutors and the Department of Licensing.