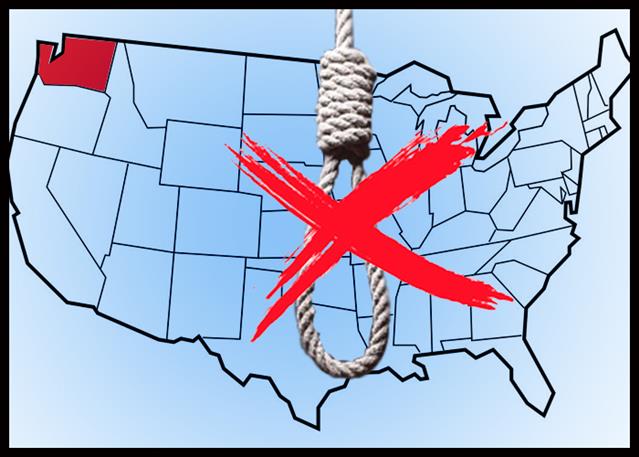 Excellent article by Rachel La Corte and Gene Johnson of the Seattle Times describes how Washington’s Supreme Court unanimously struck down the state’s death penalty as arbitrary and racially biased, making it the 20th state to do away with capital punishment.

But the court’s opinion eliminated it entirely, converted the sentences for the state’s eight death row inmates to life in prison without release, and supported a trend away from capital punishment in the U.S.

“The death penalty is becoming increasingly geographically isolated,” said Robert Dunham, executive director of the Washington, D.C.-based Death Penalty Information Center. “It’s still on the books in 30 states, but it’s not being used in 30 states. It’s becoming a creature of the Deep South and the Southwest.”

Texas continues to execute more prisoners than any other state — 108 since 2010. Florida has executed 28, Georgia 26 and Oklahoma 21 in that time frame. But nationally, death sentences are down 85 percent since the 1990s, Dunham said.

The concerns cited in those states have ranged from procedural matters, such as the information provided to sentencing jurors in New York, to worries about executing an innocent person or racial and other disparities in who is sentenced to death, as was the case in Washington.

“The death penalty is unequally applied — sometimes by where the crime took place, or the county of residence, or the available budgetary resources at any given point in time, or the race of the defendant,” Chief Justice Mary Fairhurst wrote in the lead opinion.

According to La Corte and Johnson, defense lawyers had long challenged the death penalty on those grounds. This time, death penalty critics were armed with more data about how capital punishment works, including a statistical analysis by University of Washington sociologists. Their report showed that although prosecutors were not more likely to seek the execution of black defendants, juries were about four times more likely to sentence black defendants to death.

“Now the information is plainly before us,” Fairhurst wrote. “To the extent that race distinguishes the cases, it is clearly impermissible and unconstitutional.”