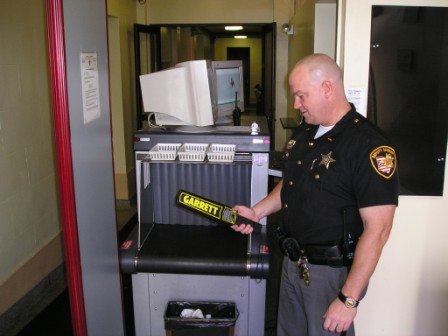 In State v. Bejar, the WA Court of Appeals held it was not prejudicial to the defendant’s case for jurors to go through enhanced courtroom security screening on a jury trial involving a gang murder.

Mr. Bejar, Jr. was charged with murder in the first degree with a firearm enhancement and unlawful possession of a firearm in the first degree. The shooting involved a gang war in South King County that was instigated by gang members disrespecting each other over social media. Mr. Bejar was the alleged shooter, and a member of the South Side Locos gang. The victim was a member of the the United Lokotes gang.

At trial, the judge ordered secondary screening strictly for any courtroom observers.

“There’s been allegations of witnesses being assaulted as a result of this ongoing gang war, and in particular Facebook posts that I read provided here refer to different people as being snitches,” said the trial judge. Consequently, he issued the following secondary screening rules:

The jury convicted Bejar of all crimes as charged. He appealed on arguments that requiring jurors to go through secondary screening was inherently prejudicial.

The Court of Appeals began by saying that the presumption of innocence is a basic component of a fair trial under our system of justice. In order to preserve a defendant’s presumption of innocence before a jury, the defendant is entitled to the physical indicia. This  includes the right of the defendant to be brought before the court with the appearance, dignity, and self-respect of a free and innocent individual.

“The fact that there was a secondary screening outside the courtroom in the hallway for cell phones did not suggest particular official concern or alarm; it was not an invasive search or conducted by guards with unusual weaponry or armed presence.” ~WA Court of Appeals

Furthermore, reasoned the Court, the secondary screening allowed for a wide range of inferences, including that such screening was designed to guard against disruptions emanating from outside the courtroom.

With that, the Court of Appeals ruled that the secondary screening of the jurors on the first day of trial was not inherently prejudicial.

“These secondary security measures did not single out a defendant as a particularly dangerous or guilty person or threaten his constitutional right to a fair trial. The trial court did not abuse its discretion in adopting such measures.” ~WA Court of Appeals

With that, the Court of Appeals affirmed Bejas’ conviction.