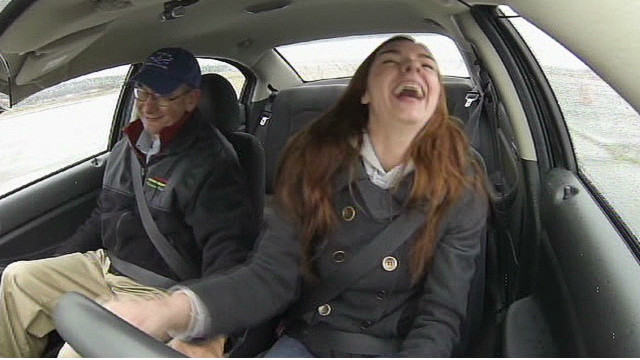 An article from the Denver Huffington Post addressed an interesting question regarding the regulation of legal marijuana: how high is too high to drive?

Given the lack of precedent, Washington TV station KIRO opted to observe actions over words. The station assembled a group of volunteers, had them smoke pot (appropriately, the strain was called “blueberry train wreck”), and set them loose on a driving test course.

A handful of police officers stood nearby, watching any telltale signs of stoned driving. Also, a driving school instructor sat in the passenger’s seat, ready to take the wheel or stomp the brake pedal at a moment’s notice.

Unfortunately, the results (while entertaining) don’t add much clarity to the question at all. A regular smoker of marijuana tested above the legal limit to begin with, yet drove without much of a problem (at least initially). Two casual smokers also navigated the course without incident. (Spoiler alert: after smoking more marijuana, things devolve quickly).

In 2012, Colorado legislators declined to pass a law that would have limited drivers to 5 nanograms of THC, the psychoactive ingredient in marijuana, per milliliter of blood.

“This is a bit of unprecedented territory, so trying to find the right approach has proven difficult and cumbersome,” explained Rep. Dan Pabon, a lawmaker on Colorado’s marijuana-legalizing task force, to CBS News in 2012.

Washington lawmakers, meanwhile, passed a law in 2012 setting the threshold for legal impairment at 5 nanograms of THC, reports NPR.

Ultimately, though, it comes down to common sense. Explains Bob Calkins, a Washington State Patrol spokesman, to The Oregonian, “We don’t just pull people over and draw blood… If you’re driving OK, we’re not going pull you over. But driving impaired is still driving impaired.”

Please contact my office if you, a friend or family member are charged with a Drug DUI. Hiring an effective and competent defense attorney is the first and best step toward justice.