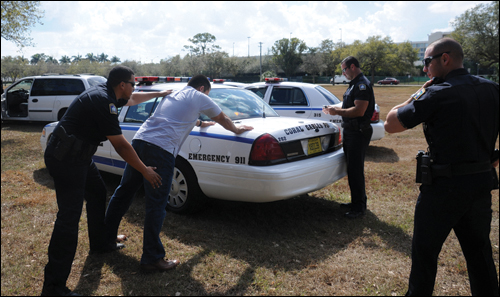 In State v. Z.U.E., the Washington Supreme Court decided that when police stop an individual based on an informant’s tip, there must be some “indicia of reliability” based on the totality of the circumstances. Here, there wasn’t.

The facts show that Z.U.E. was a juvenile passenger in a car stopped by police after several 911 callers reported a bald shirtless man seen carrying a gun. Another caller reported a 17 year old female gave the gun to the shirtless man. Based on these tips, police stopped a car believing that the female was in the car. They ordered Z.U.E out of the vehicle, searched him, and found marijuana on his person. The officers did not find any guns, nor did they find the bald, shirtless subject.

The state prosecuted Z.U.E for Unlawful Possession of a Controlled Substance and Obstructing a Law Enforcement Officer. At his trial, Z.U.E. argued a CrR 3.6 Motion to Suppress and essentially challenged the Terry stop and subsequent search incident to arrest. The police who stopped ZUE did not know how many 911 callers there were or the identities of the callers and did not corroborate the report regarding the female with a gun.  The trial court denied the motion. Z.U.E. was found guilty of the drug charge and acquitted on the Obstructing charge. Z.U.E. appealed. The WA Court of Appeals reversed, holding that the 911 calls lacked sufficient “indicia of reliability” to justify the stop. Again, the case went up on appeal – this time, by the State –  to the WA Supreme Court.

The WA Supremes affirmed the WA Court of Appeals and suppressed the evidence. In reaching their decision, the Court discussed Terry stops. In challenging the validity of a Terry stop, article I, section 7 of the WA Constitution generally tracks the U.S. Constitution’s  Fourth Amendment analysis. That said, warrantless seizures are presumed unreasonable, and the State bears the burden of establishing that the seizure falls within one of the carefully drawn exceptions to the warrant requirement. One such exception is a brief investigatory detention of a person, known as a Terry stop. For a Terry stop to be permissible, the State must show that the officer had a “reasonable suspicion” that the detained person was, or was about to be, involved in a crime.

They court further reasoned that when police stop an individual based on an informant’s tip, there must be some “indicia of reliability” based on the totality of the circumstances. There must be either (1) circumstances establishing the informant’s reliability or (2) some corroborative observation by the officers that shows the presence of criminal activity or the informer’s information was obtained in a reliable fashion. Here, the police did not have any articulable reason to suspect any of the passengers in the car of criminal activity. The seizure of Z.U.E was unlawful and the evidence obtained as a result of that seizure should have been suppressed.

My opinion? Good decision. This was a straightforward application of the law. The informant tips were unreliable. Also, Z.U.E.’s involvement on the 911 calls and firearms was so attenuated that it was virtually irrelevant. Well done, WA Supremes!