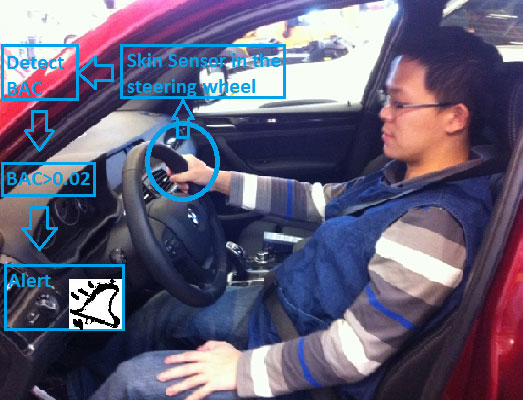 The Washington Post reported that recent technological breakthroughs could virtually eliminate DUI’s which kill thousands of Americans each year. The technology could begin appearing in cars in five years.

Unlike ignition interlock devices, the new equipment won’t require a driver to blow into a tube. Instead, either a passive set of breath sensors or touch-sensitive contact points on a starter button or gear shift would immediately register the level of alcohol in the bloodstream. Drivers testing above the legal limit wouldn’t be able to start the car.

Though no cost-per-car estimate has been made, once the sensors go into general production it’s anticipated the cost will be equal to that of seat belts or air bags, about $150-$200 per vehicle.

The article said that the goal is to produce a device that will react in less than a second and function without maintenance for at least 10 years or 157,000 miles. Sensors that detect alcohol levels in the air can react in less than a second after a driver gets into the vehicle. The technology is an offshoot of advances in sensory detection since the Sept. 11, 2001, terrorist attacks. With sudden demand for bomb detection sensors, the ability of machines to scan people, packages and luggage for tiny trace elements has expanded exponentially.

Data from the NHTSA shows that in 2013, 10,076 people were killed in car crashes involving drunk drivers. That was less than half the number of alcohol-related traffic deaths recorded in 1982, when 21,113 people were killed. In the past 30 years, 401,404 people have died in drunken-driving crashes.

My opinion? It’ll be interesting to see how various lobby groups fight or support this new technology.