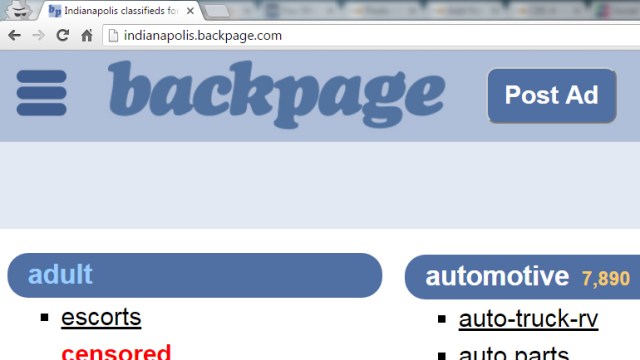 In In re Personal Restraint of Hopper, the WA Court of Appeals held that a defendant’s calls and text messages to the phone number listed in a Backpage.com advertisement were not private communications protected by the Washington Privacy Act.

In December 2012, Mr. Hopper searched Backpage.com with the intent of purchasing sex. Backpage operated an online classified advertising service, Its users created and posted their own ads, including ads in the adult category. This category included ads for prostitution activity, often under the guise of an adult escort or entertainment service. The ads often featured pictures of women identified by false names and ages, along with hourly rates.

Hopper saw an advertisement for a woman named “Whisper,” who he later learned was K.H. The ad stated that she was 19 years old. She was actually 16 years old. It listed a phone number that Hopper both called and contacted by text. When he contacted the number by text, he initially believed that he was communicating with K.H. But K.H.’s pimp, identified as Mr. Park, had listed his own number on the ad and was reading and responding to Hopper’s text messages.

In December 2012, police arrested Park and, with a warrant, searched his cell phone. K.H. told police that Hopper had paid to have sex with her and identified him from a photograph montage. The police located Hopper’s home address from the text messages stored on Park’s phone. The State charged Hopper with commercial sexual abuse of a minor. In March 2014, a jury convicted Hopper as charged.

Hopper appealed his conviction on arguments that his trial counsel gave ineffective
assistance by failing to move to suppress his text messages to K.H., which police found stored on Park’s cellular phone.

The Court of Appeals noted the Act does not define “private.” Instead, Washington courts have adopted the dictionary definition. Nevertheless, Washington courts will generally presume that each of the two parties participating in the conversation intends it to be private.

“Hopper’s subjective expectation of privacy was objectively unreasonable,” said the Court of Appeals. The Court explained that Hopper responded to an ad on Backpage.com, a website notorious for advertising prostitution activity. The ad was titled “any way you want it 19” and featured an unidentifiable woman with a fictitious name. A reasonable person would not expect that contacting a stranger by text through the phone number listed in this advertisement would provide a legitimate opportunity for a private conversation with a known person. Even Hopper admitted that “the picture wasn’t a good enough picture to clearly identify a specific person.”

“And regardless of whether Hopper was initially aware of K.H.’s pimp, it is common knowledge that prostitutes often have pimps. Thus, even though Hopper subjectively intended for his text messages to K.H. to be private, his communications were not private
because this expectation was unreasonable. Park did not violate the act when he recorded and stored Hopper’s messages to K.H. on his cell phone.”

The Court of Appeals concluded that because Hopper does not establish that these text messages were “private communications” under the act, he does not show that his counsel’s performance fell below an objectively reasonable standard of care. His claim failed. The Court of Appeals upheld Hopper’s conviction and found his attorney was not ineffective.

Please contact my office if you, a friend or family member face criminal charges involving searches of cell phones. Depending on the circumstances, the evidence might be suppressible. And for more information on search warrants, please read my Legal Guide on Search & Seizure.