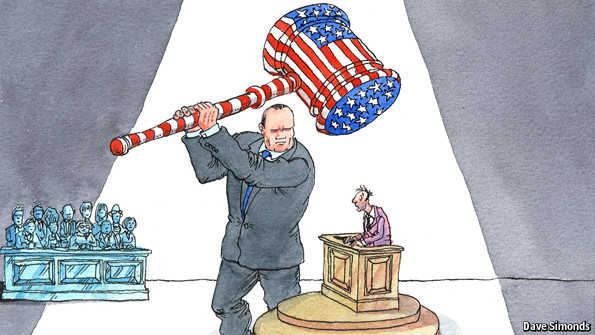 Interesting.  According to a recent report, only a tiny percentage of prosecutors who engaged in misconduct were disciplined by the State Bar of California during a 12-year period.

The report, issued by the Northern California Innocence Project at Santa Clara University School of Law, found 707 cases between 1997 and 2009 in which courts explicitly determined that prosecutors had committed misconduct. It examined more than 4,000 cases.  Among the 707 cases, only six prosecutors — 0.8% — were disciplined by the State Bar of California. Only 10 of the 4,741 disciplinary actions by the state bar during the same period involved prosecutors.

“Preventable Error: A Report on Prosecutorial Misconduct 1997-2009,” issued by the Innocence Project’s Northern California chapter, was written by Ridolfi and Maurice Possley, a visiting research fellow at the project. Possley won a Pulitzer Prize for his reporting at the Chicago Tribune. Ridolfi is a professor at Santa Clara University School of Law.

The report included recommendations for reform. It called for district attorneys to adopt internal policies that do not tolerate misconduct. It also called for the state bar to increase disciplinary transparency.

My opinion?  The study supports what most defense attorneys already know.  I’ve worked cases where prosecutorial misconduct was clear and obvious.  However, after bringing the misconduct to the attention of judges on pretrial motions, I’ve found my concerns routinely overlooked, tolerated, condoned and/or minimized.  Sanctions are rarely given and the matter is swept under the rug.

One could argue that elected prosecutors have a level of political influence with the judges hearing criminal cases.  Very often, judges are former prosecutors.  Prosecutors also exhibit  a “halo effect” among voters which defense counsel does not have.

Although I don’t fully support those arguments (well, maybe just a little), I fully believe that judges simply want to evade mudslinging contests between prosecutors and defense attorneys altogether.  Judges tend to allow the governing Bar Association sort these matters out.