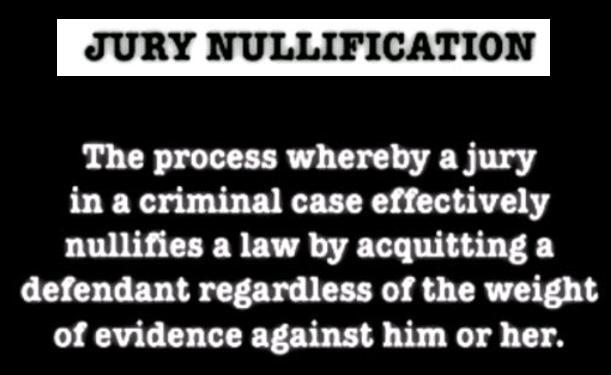 Interesting. There’s pending legislation from Georgia on jury nullification.  Titled, The Fully Informed Jury Act of 2013, this bill would ensure jurors are informed of their rights, including the right to acquit defendants because the law was seen as unjust and/or unconstitutional. For those who don’t know, jury nullification in a criminal trial is what happens when a jury effectively nullifies the law in that specific case by acquitting the defendant, regardless of the weight of evidence against them.

My opinion? I hope the law passes. As a juror, it is your duty to protect our citizens by sending criminals to jail; however, if you believe the defendant is being prosecuted under an unjust law, you have the right, and the constitutional and moral obligation to protect the defendant from tyrannical government and acquit.

Does nullification happen often during trial? No. Although I’ve been instructed via the Prosecutor’s pretrial motions to NOT argue for nullification – and I’ve conducted numerous criminal jury trials for DUI, drug possession, assault, sex crimes, property crimes, etc. – I’ve never blatantly asked a jury to nullify anyway. First, I’ve always thought jurors would consider nullifying under their own volition, and without my behest.

Second, I’ve always feared that prosecutors and judges would probably frown upon my asking jurors to nullify. In short, jury nullification encourages jurors to not follow the law. This is big. After all, jury trials are a very expensive use of the Prosecutor’s and court’s time. And at the end of the day, these parties do not want to encourage citizens to acquit people on the basis that the law itself is unjust.

Still, and as the article illustrates, during the first century of the U.S. it was common practice for judges to inform jurors of this right as part of their instructions. Prior to the Civil War and thanks to jury nullification, many abolitionists and slaves  were safeguarded and set free by juries when prosecuted for participating in the Underground Railroad in violation of the Fugitive Slave Act. Jury nullification was also successful in acquitting defendants whoe were prosecuted during the alcohol prohibition era.

And when you think about it, a juror’s right to nullification, to be judge of both the facts and the application of the law, is enumerated in many State Constitution’s Right to trial by jury; which outline the number of jurors; selection and compensation of jurors. Most constitutions state, “In criminal cases, the defendant shall have a public and speedy trial by an impartial jury; and the jury shall be the judges of the law and the facts.”